The frog on the island has returned in “Zuma’s Revenge!” Fun and addicting, you plan as a frog who can detonate chain explosives on his path to defeating malicious tiki lords on a lost island. Our “Zuma’s Revenge” gameplay walkthrough will guide you through the basics, every game mode, and each boss.

– Go for the largest collections of color first to acquire multipliers and zuma much quicker.
– Achieving zuma will help you conquer each level. To acquire zuma, you need to fill the orange bar at the top of the screen by gaining points from destroying lines of balls. Zuma will reverse the direction of the balls. In addition, zuma will give you time to figure out what to do next.

– Begin the game slowly. Knowing the basic concepts introduced in the tutorial are essential to completing later levels.
– You can plan two moves ahead by looking at the next ball in your frog’s inventory.
– The level will end once all of the balls are destroyed.
– If no balls in the line match the color of ball you are holding, then shoot it off to the side.
– Never destroy the last ball in line until the very end. Destroying the final ball will push the other balls forward.
– You will reach a checkpoint after the first six levels of a stage.
– There are a few bonuses that will help you acquire more points in each level. The different bonuses require separate conditions to be met. As you play, you will want different bonuses depending on the situation.

— When you complete a level within the ace time, you will receive the ace time bonus.
— The chain bonus requires you to cause five or more explosions in succession. Once the fifth explosion is triggered, you will acquire a bonus for subsequent explosions that you trigger.
— A combo bonus occurs when two groups of the same color, separated by an off color, collide. All you need to do is destroy the balls between the two groups of the same color. Combo bonuses provide the player with a passive boost to points gained during combinations.
— An end level bonus depends on the distance the final ball was from the skull’s mouth when it was destroyed.
— The fruit bonus will net you more points per explosion. To acquire the fruit bonus, destroy a collection of balls that are the same color that cover the fruit. Directly after firing your ball, fire another to hit the fruit.
— Firing between balls to hit balls behind them is known as a gap bonus. The narrower the gap, the greater the bonus. Causing an explosion during a gap bonus will net you even more points!

“Zuma’s Revenge” has four different game modes. Adventure mode is the main mode, and it must be completed before the other modes are unlocked.

Adventure mode is the primary mode in “Zuma’s Revenge.” In adventure mode, you will advance through a series of levels and stages. Luckily, we have a few tricks to get you through it faster. At the end of each stage is a boss that must be defeated. Refer to the bosses section if you need a few tips to defeat them! You will also acquire upgrades to your spirit temple by advancing through adventure mode.

Weekly challenge is a mode that is updated every week. The challenge varies week to week, but our tricks will help you complete them.

Iron frog is a challenge to complete every stage as fast as possible while acquiring as many points as possible. While you can view iron frog as a personal challenge, there are leaderboards that will give you insight into how you compare against other players. Our tricks and quick tips will help you boost your score. The difficulty of iron frog is higher than the difficulty in adventure mode.

Boss Rush is the final mode. You will go up against each of the game’s bosses with a finite number of lives. Boss mode can be fairly difficult. Luckily, our guide and tips will help you down all of them.

The basics of “Zuma’s Revenge” are simple enough. You will play as a frog that can spit balls at a line of other balls that will appear from a single source. If the line of balls reaches the golden skull, then you will lose a life.

The frog can’t move horizontally or vertically. He can only spin based on the orientation of your mouse or controller stick. Once the frog is facing in the direction you desire, simply click to have him fire a ball. The goal is to line up three or more balls of the same color and detonate them to acquire points. Your zuma counter will also increase based on the points you acquire.

The levels in “Zuma’s Revenge” become progressively more difficult and are divided into stages. At the end of each stage is a challenging boss that must be defeated. If a boss trips you up, check out our strategies and tips for dealing with them!

“Zuma’s Revenge” has six bosses that you must take down to complete the game. Each boss presents its own set of unique challenges. We have a few tips that will make them a little easier to tackle.

– Khan takes damage when he is hit by a ball that you fire at him.
– Khan is protected by rows of balls that prevent you from hitting him easily.
— To overcome the ball obstacle, wait for Khan to move behind a group of balls that are the same color. Destroy the cluster and quickly fire at Khan again.
– While waiting, keep the row closest to you clear of balls.
– Combos are very useful when trying to open up a shot.
– Avoid being hit by his stones. The stones will stun you for a second or two. 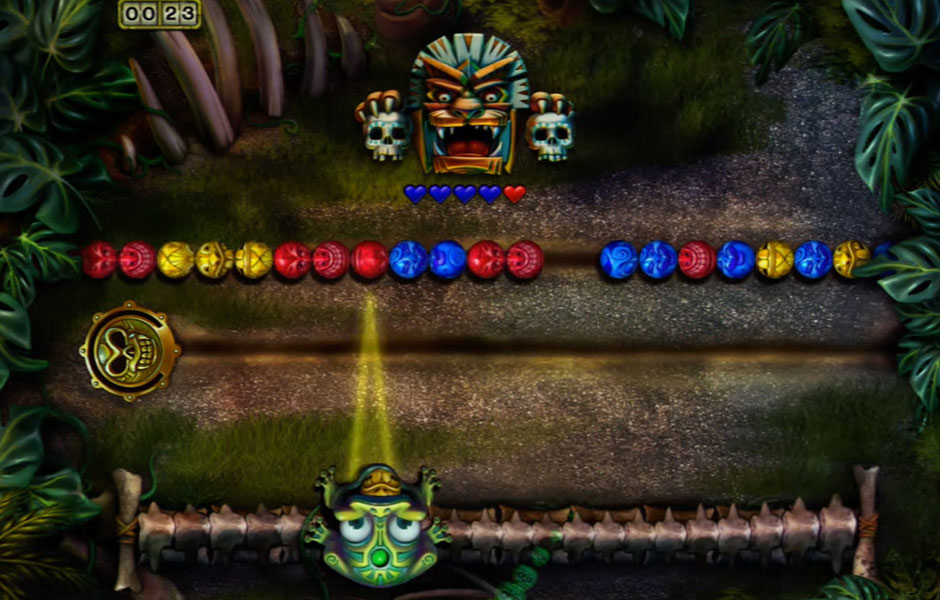 – Maga takes damage when he is hit by a ball that you fire at him.
– Like Khan, Maga is protected by a row of balls. All you need to do is clear a gap in the balls to hit him and his tikis.
– Maga also has two tiki protectors. Before you can damage Maga, you will need to destroy his two tiki protectors by striking them with a ball. You will know Maga is vulnerable when the gate in front of him disappears.
– Avoid Maga’s attacks. When you are hit, you will move in the opposite direction from the one you indicate. 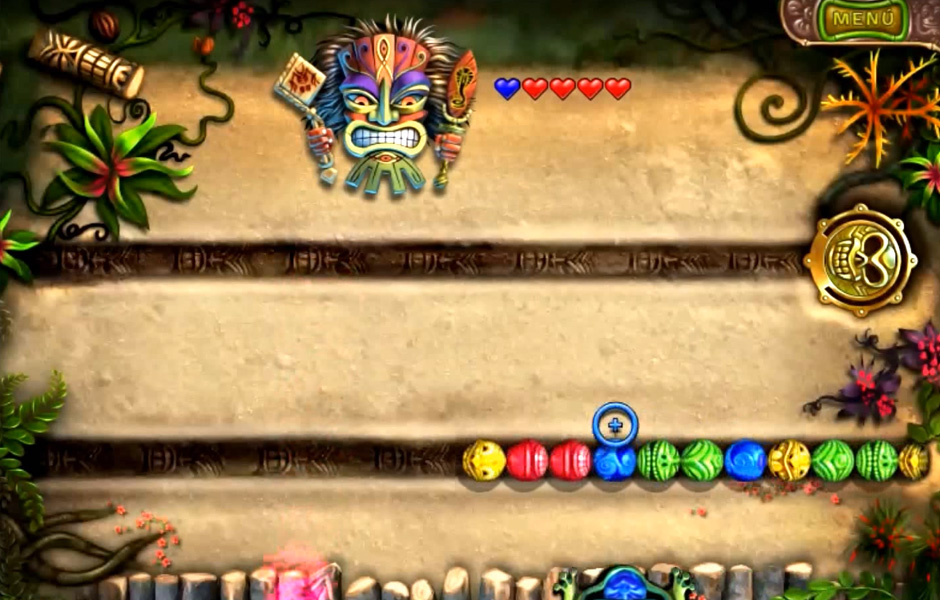 – Digo is protected by a row of balls. Overhead, you will see skeletons that zip by over the balls. The best strategy is to clear a gap and hit one of the skeletons.
— Once you have hit a skeleton, a blue beam will fire from your frog’s mouth. Quickly drag your frog in the direction of Digo and hit him with the beam. 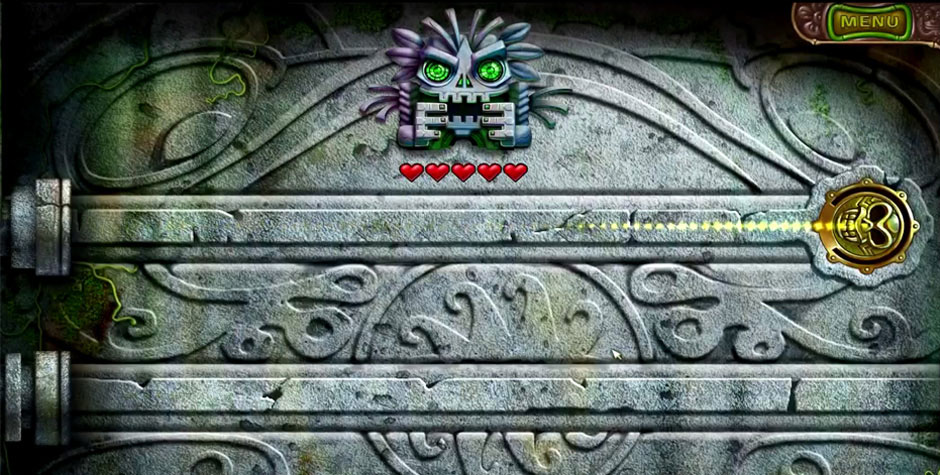 – Balls marked with a bomb are the only way to damage Kamari. Time the explosion of a bomb ball when it is near Kamari.
– Kamari will occasionally move across the zone.
– Avoid the mosquitoes! They will slow you and your balls down.
– Kamari requires a great deal of patience. You will spend most of your time clearing balls and keeping them from the skull at the end. 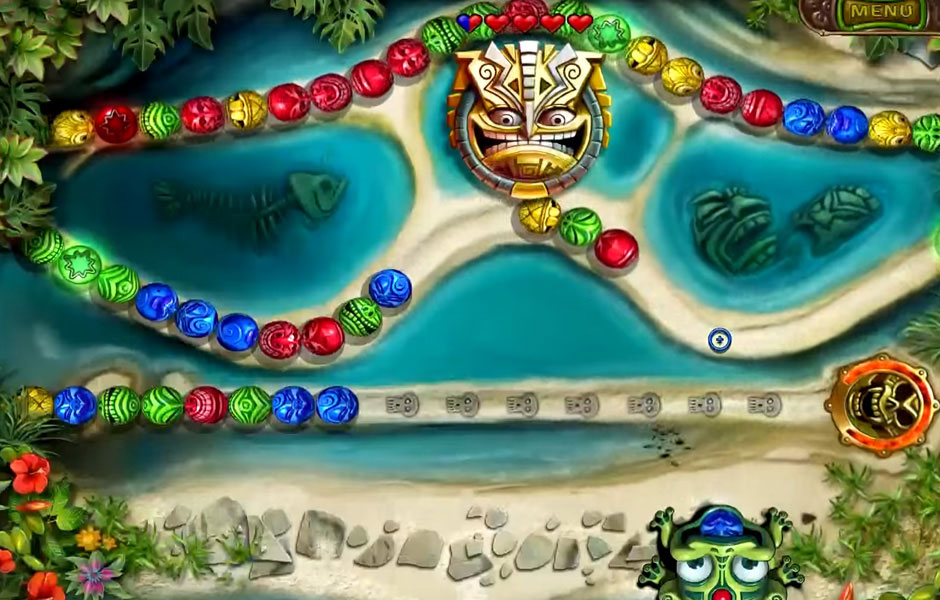 – Ka is protected by a blue circle that will prevent you from hitting him. To land a hit, you will need to destroy bomb balls near him. The bomb balls will do a little bit of damage after exploding.
– Ka’s shield will regenerate over time, so make sure you keep the pressure up!
– If you can fire a ball that passes through a gap in Ka’s shield, then you will do a large chunk of damage. 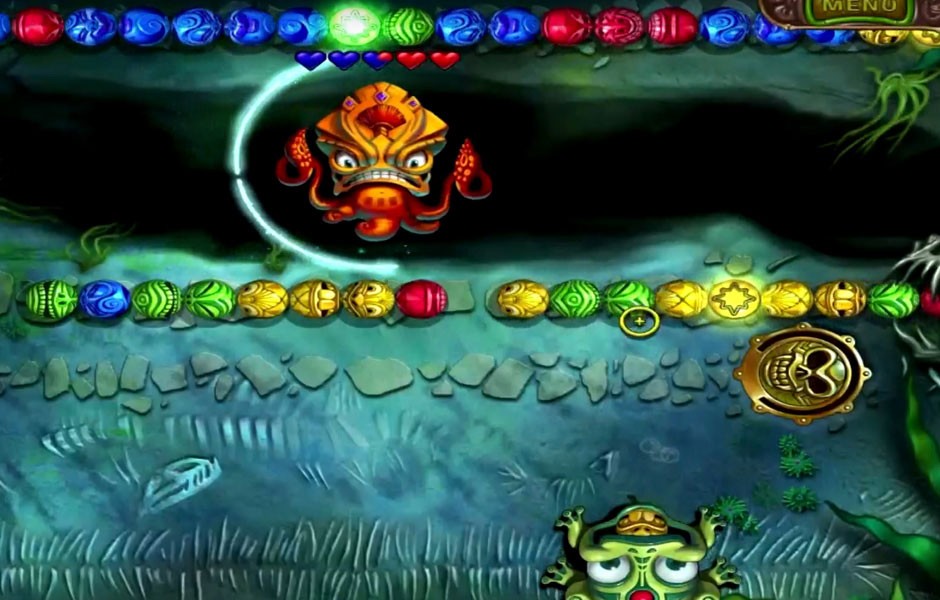 Zaka Mu And His Cronies

– Mu has five separate stages.
– The first stage will complete after you create a gap and shoot the boss. Congratulations!
– You will be taken immediately to the next boss. Your objective is simply to create gaps and shoot the boss. His attacks will prevent you from firing and slow you down.
– Mu appears after Crumbleness is defeated. Mu begins much like Crumbleness, so just continue to open gaps and fire until he is dead.
– Shadow Frog is the final incarnation of Mu. Shadow Frog’s attacks mirror your own. To defeat him, open a gap while you are beneath him and fire a ball right after. Remain where you are until your ball hits! Moving before your ball makes contact will mean a miss.
– Shadow Frog’s attacks stun you. They can usually be avoided at the last second. 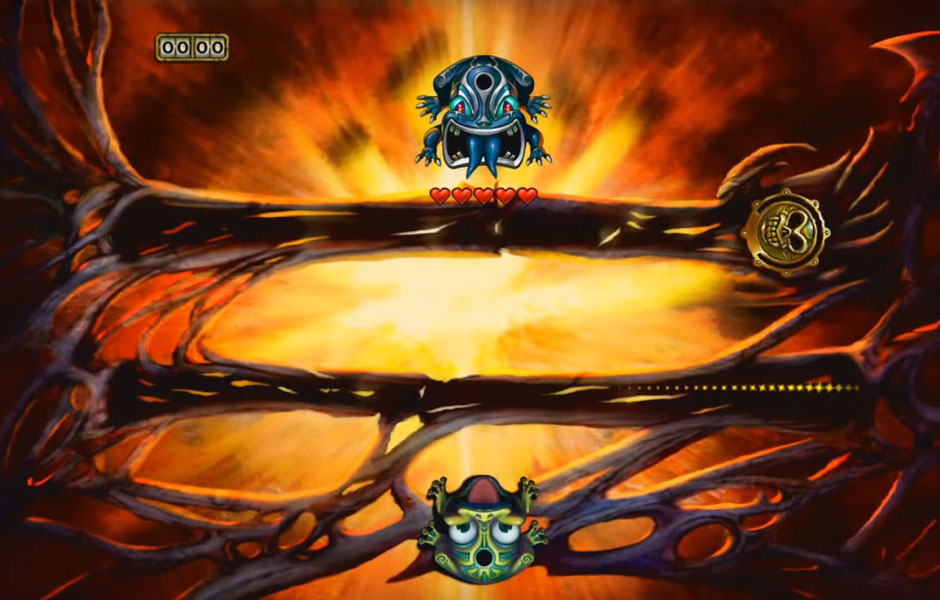 We hope you enjoyed our “Zuma’s Revenge” Gameplay Walkthrough. Want more? Be sure to check out one of our other guides!

The Zuma’s Revenge Walkthrough is meant as a guide and does not contain cheats, hacks, or serials.