The Rise of Atlantis Walkthrough

Embark on an adventurous journey around the ancient lands of the Mediterranean in The Rise of Atlantis to gather the seven powers that will help raise the city of Atlantis. In each of the seven countries visited assemble magic artifacts piece by piece. Once complete, the assembled artifact is placed in Poseidon’s Altar. When all seven artifacts are placed in Poseidon’s Altar the city of Atlantis rises again.
The Rise of Atlantis Walkthrough Gameplay Guide assists players through the 77 levels of gameplay fun by providing tips and tricks, guidelines, and hints to successfully raise the city of Atlantis. Divided into two sections, toggle or scroll, to reach the section you wish to review to obtain valuable insights on completing the adventure by solving Match 3, 4, or 5 puzzle games and board game fueled by a quest.

The Rise of Atlantis Walkthrough

The Rise of Atlantis is a Match 3 game full of puzzles that also contains a quest to put together an artifact to use and combine with 7 other artifacts to create an altar. The altar will allow the player to raise the city of Atlantis. Before the game starts however, some customizations are in order.

Enter a Screen Name to identify the player. Other players can be added or subtracted by selecting the Change Player button.

The Main Screen contains buttons that allow access to the game and available customizations. The Start and Exit buttons are self-explanatory. Select these buttons to begin gameplay or to exit from gameplay. Levels are saved making it easy to save progress for gameplay at a later date and time.

The Options button permits the player to modify sound and music settings along with the video settings – full screen or windowed are the available options. A custom cursor can also be selected and an option to play the game showing tips is also present. For the true computer game aficionado, credits from developer Terminal Studio can be reviewed in this section

The map of the lands that make up the ancient kingdoms of the Mediterranean Sea can be accessed at the Travels button. This button also allows the player to monitor her progress and return to any unlocked locations. At the end of the game, when all the levels are completed and the city of Atlantis is raised, a 3D screen saver is created and can be used on the player’s individual computer or laptop monitor.

Section Two: How To Play The Rise of Atlantis

In the electronic Match 3 and board game The Rise of Atlantis the player visits 7 ancient lands. The ancient lands are: Phoenicia, Babylon, Egypt, Carthage, Rome, Greece, and Troy. When the player enters the new lands, she is told about the artifact she must find. Once the artifact pieces are freed they are used to assemble the artifact. The artifacts themselves are also puzzle pieces. As the Match 3 game puzzles are cleared, the player assembles the artifact.

The artifact has historical significance to the featured societies. The combined artifacts create the most powerful tool imaginable, enabling the city of Atlantis to Rise again. To move onto the next level, place the artifact in Poseidon’s Altar. This process will need to be followed and repeated in all 7 lands. There are 10 levels in each of the lands for a total of 77 Match 3 games to play. 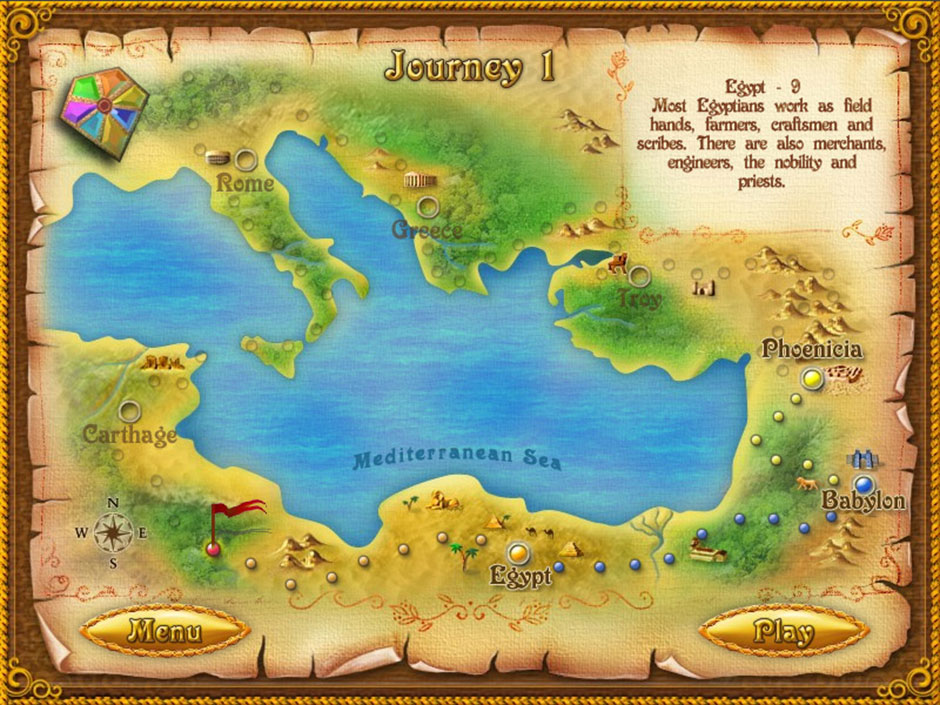 The Rise of Atlantis – 1

Swap adjacent tiles together to form matches of 3 like tiles. Hint: The tiles must be of the same shape, size, and color.

Match 4 or more like tiles together (same size, shape, and color) to recharge the Sun

There are 4 Bonuses in the game available for play. They are the Bomb, Sun, Lightning, and Clock Power Ups. To clear the Bonuses or the Power Ups, the items must be free by making Match 3, 4, or 5 pairings. Like the artifact assembly rule, to free the Bonuses bring the items down to the bottom of the gameplay board layout. Once freed, the bonus is collected and stored in the lower portion of the left hand sidebar contained on the screen. TIPS AND TRICKS: Bonuses can be accumulated and used in any level. 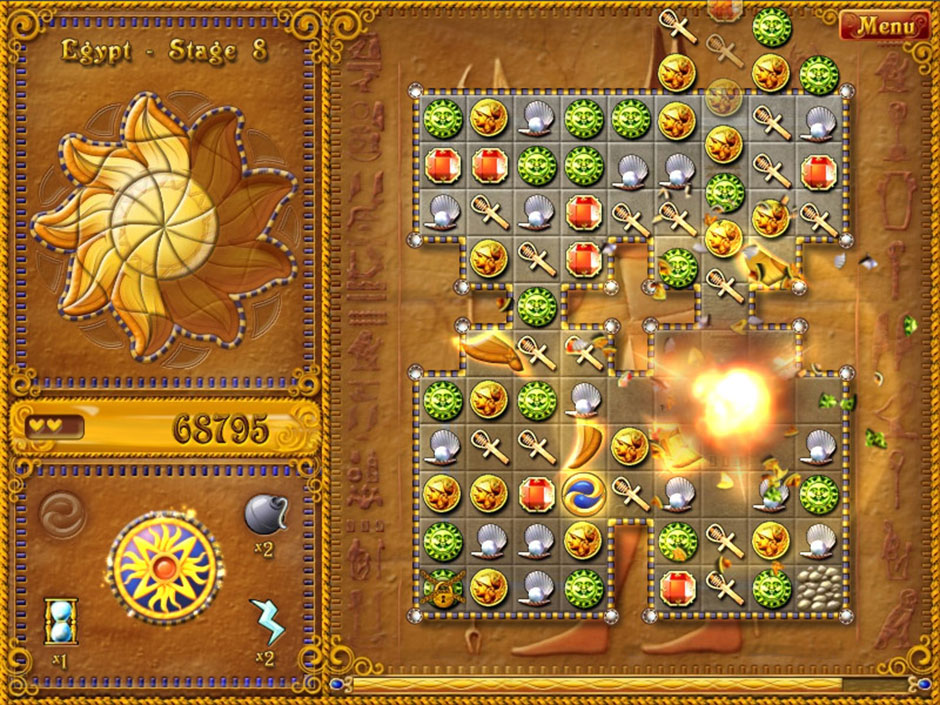 The Rise of Atlantis – 2

The Power Ups available in The Rise of Atlantis add time or eliminate sections of the gameplay board in one move. Throughout gameplay, bonuses will be present in the game board layout, collect them. The collected Bonuses can be used to make the following moves. 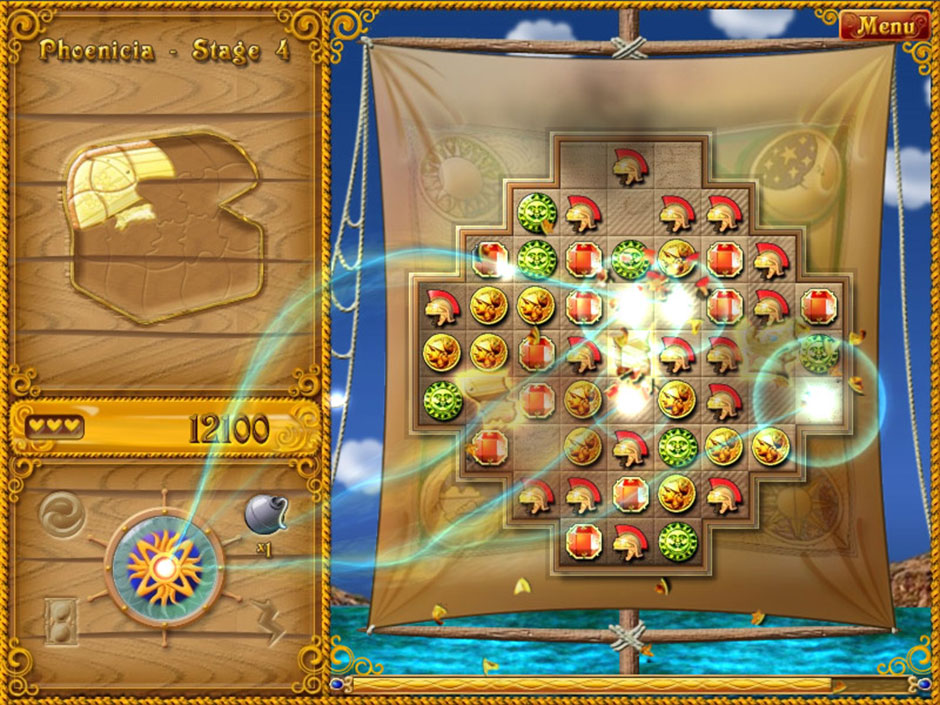 The Rise of Atlantis – Power Up 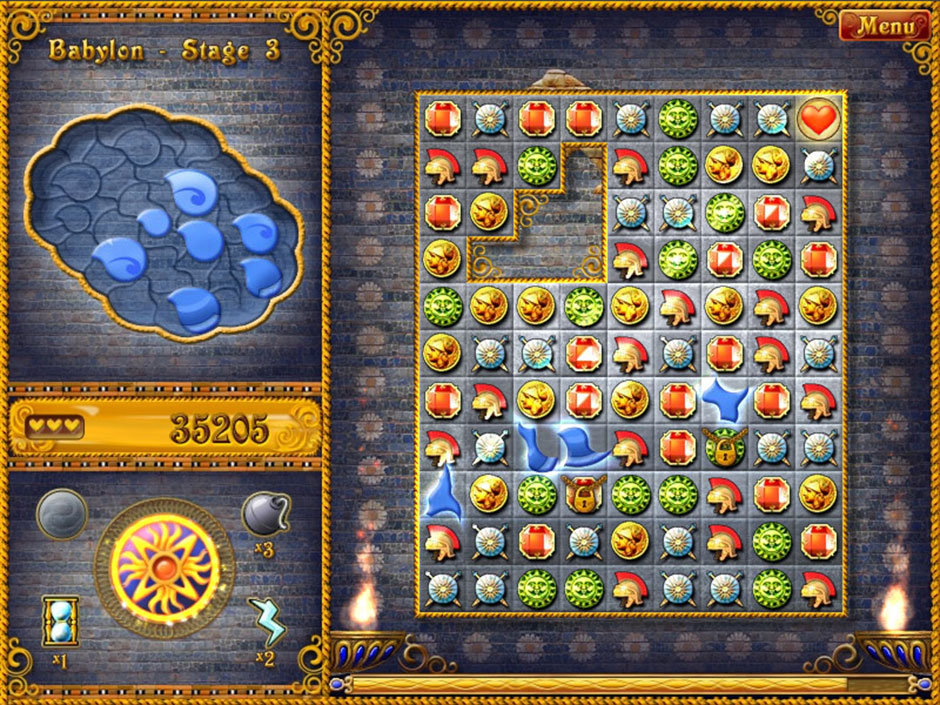 The Rise of Atlantis – 3

The Rise of Atlantis Walkthrough Gameplay Guide is meant as a guide and does not contain cheats, hacks, or serials.