Super GameHouse Solitaire is back with ten new games designed to challenge and entertain. Sometimes you want a simple game to relax with after a hard day, while other times you want to be challenged with having to strategize every move. In this collection the games range from Easy to Very Hard, so you are sure to find the perfect game to fit every mood. There are no cheats, but this guide will explain the basics of the different games and give tips and tricks to get hours of entertainment.

These ten games range in difficulty from Easy to Very Hard. When you hover over a game, you’ll see a preview of the game in the center box. This will show the layout of the game and the difficulty level. After you click to play, you will be shown a short how-to about the game. In this walkthrough, we will provide more detailed information, as well as additional tips and tricks to help you master the game. 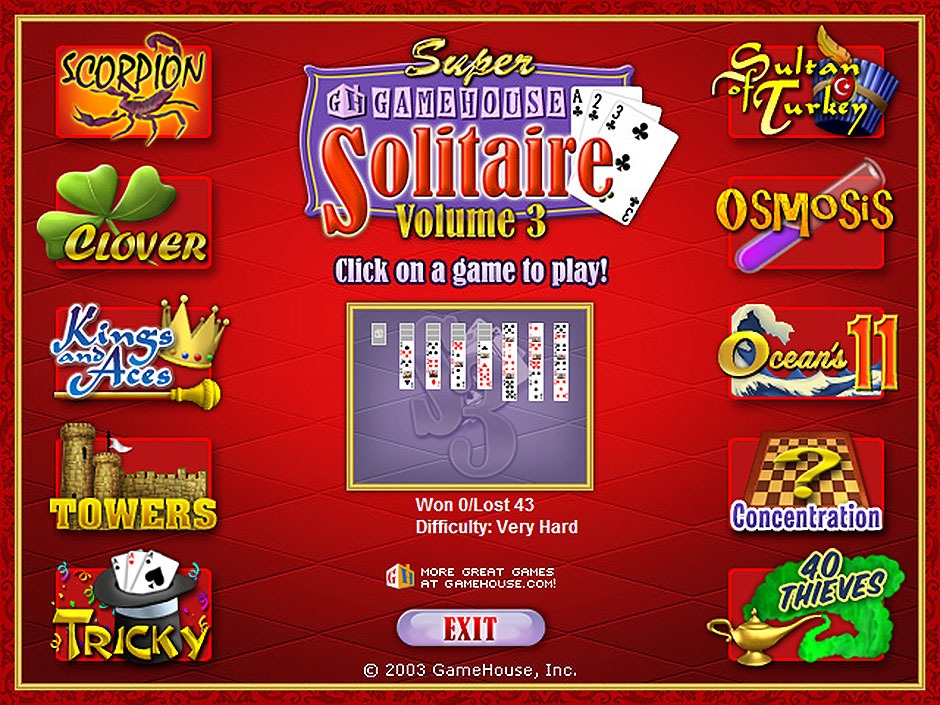 If you are new to Solitaire games, here is an explanation of some of the terminology you will find in the games’ how-tos.

Scorpion is rated “Very Hard” for a reason. There are no Foundation piles in this form of Solitaire. The goal is to end with four piles of cards in the Tableau, arranged by suit with king on bottom up to Ace on top.

The Tableau acts a little differently in Scorpion. You can move any card in a Tableau pile, along with all cards on top of it, and place it on a top card that matches suit and is one rank higher. The difficulty is in avoiding blocked piles. 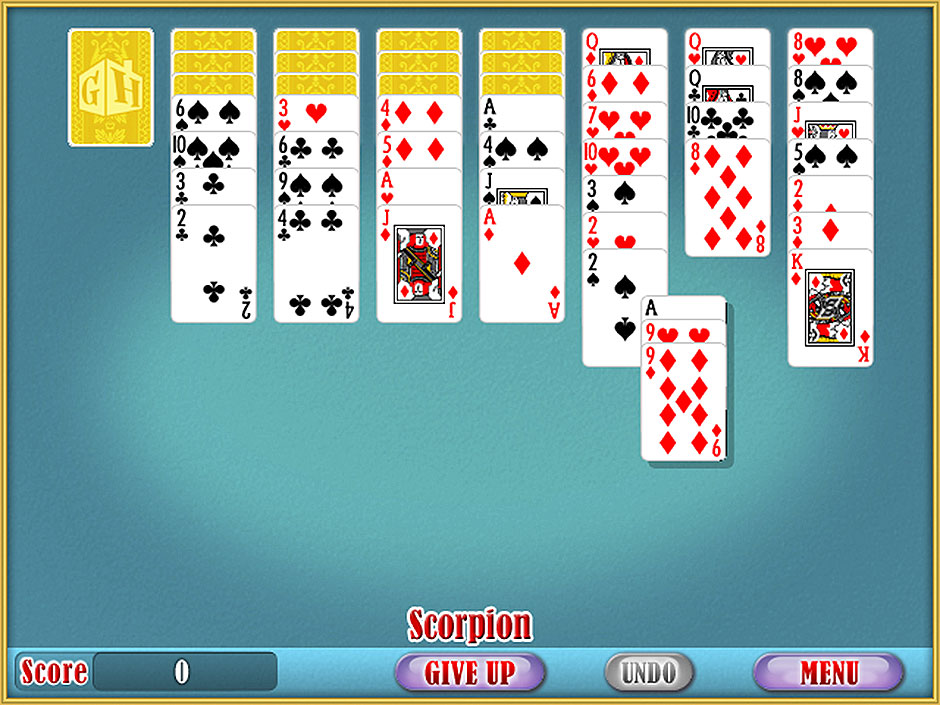 In Clover, you want to build up the four Foundation cards, by suit, from Ace to King. Do this by arranging cards in the Tableau down in suit. You can only move the top card in a Tableau pile. The exception is that when you have a build-up more than one card by suit in order, you can move the pile. 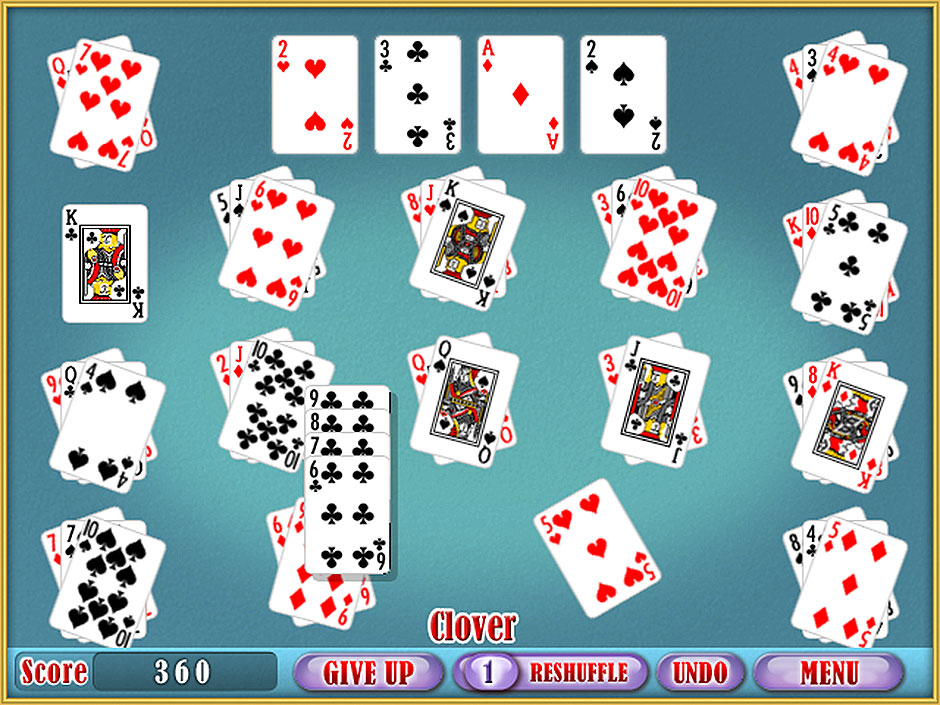 Lady Luck is the primary factor in this game. The goal is to put all stock cards onto the Foundation cards, by suit, from Ace to King. You simply flip over one card at a time. You can build down on the row of Kings, which helps keep more cards available. Discarded cards go in a single discard pile, of which only the top card is available. 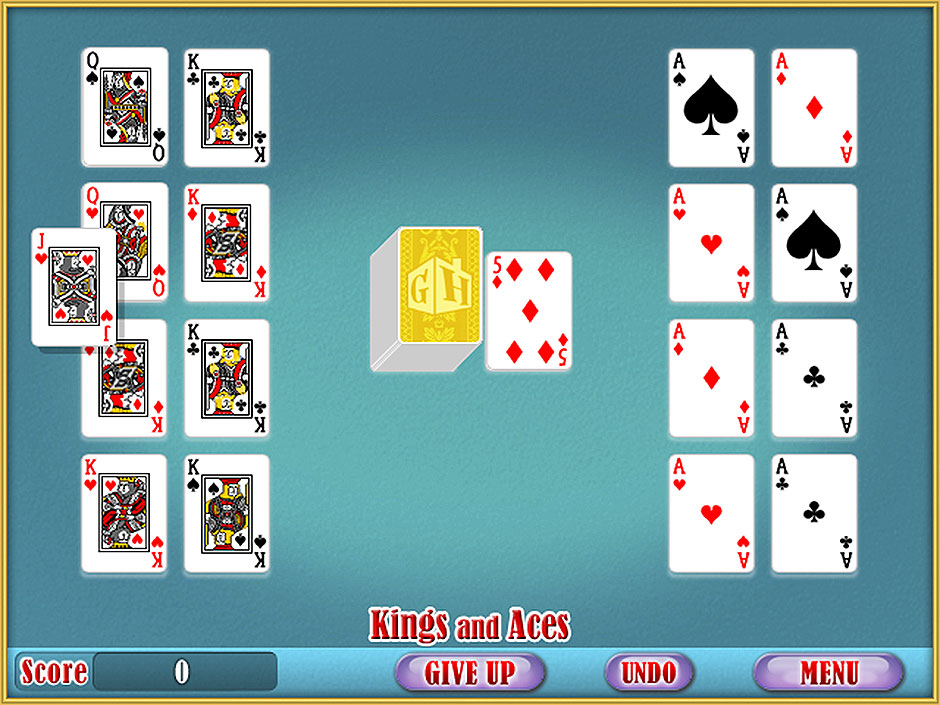 In this game that is rated Hard, you want to get all Tableau cards to the Foundations cards, building up by suit from Ace to King. The difficulty comes from only being able to move a single card at a time. The four Reserve spaces help, but two are already filled during the deal. The main thing with this game is to plan ahead several moves. 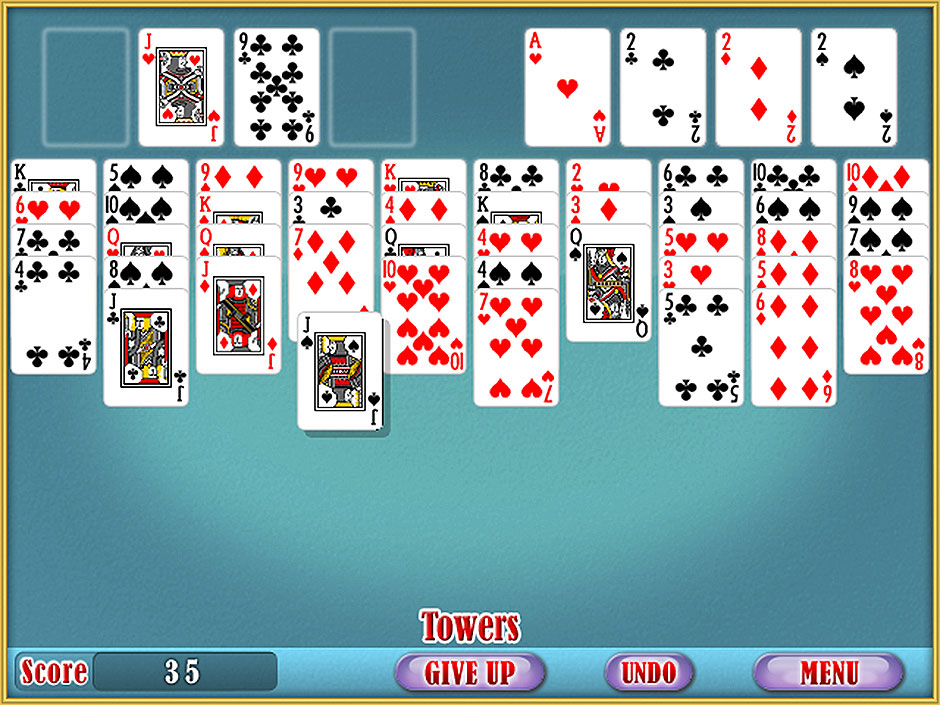 This is another game that is rated Hard. Again, you want to move all cards to the Foundation by suit. You have a Tableau of 13 cards. The first thing to do is see if any Tableau cards can be moved to the Foundation, starting with the Ace and building up to King. When you have exhausted all those possibilities, find a pair of cards with the same rank and click on them. This sends those two cards to the Discard pile.

Sultan of Turkey is a game of Medium difficulty. All of your Foundation cards are already placed. On the Kings (except for the center King of Hearts) first place an Ace, then build up by suit to Queen. On the Ace of Hears, build up to Queen. 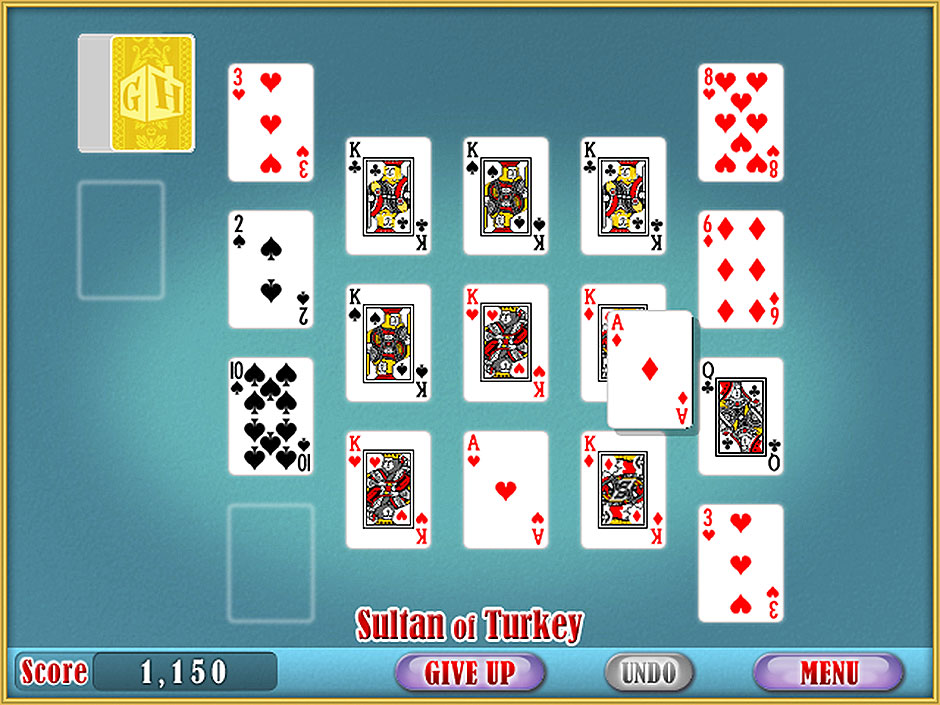 While only a Medium difficulty, this game is a little tricky to learn. Here, it does not matter what order you place cards onto the Foundation. However, you can only place a card on a Foundation pile if the suit directly above that suit already has that rank. For instance, in the game below you cannot place the Jack of Spades on the Spades Foundation pile. Even though the top Foundation has a Jack, the Foundation immediately above the Spades does not have a Jack. 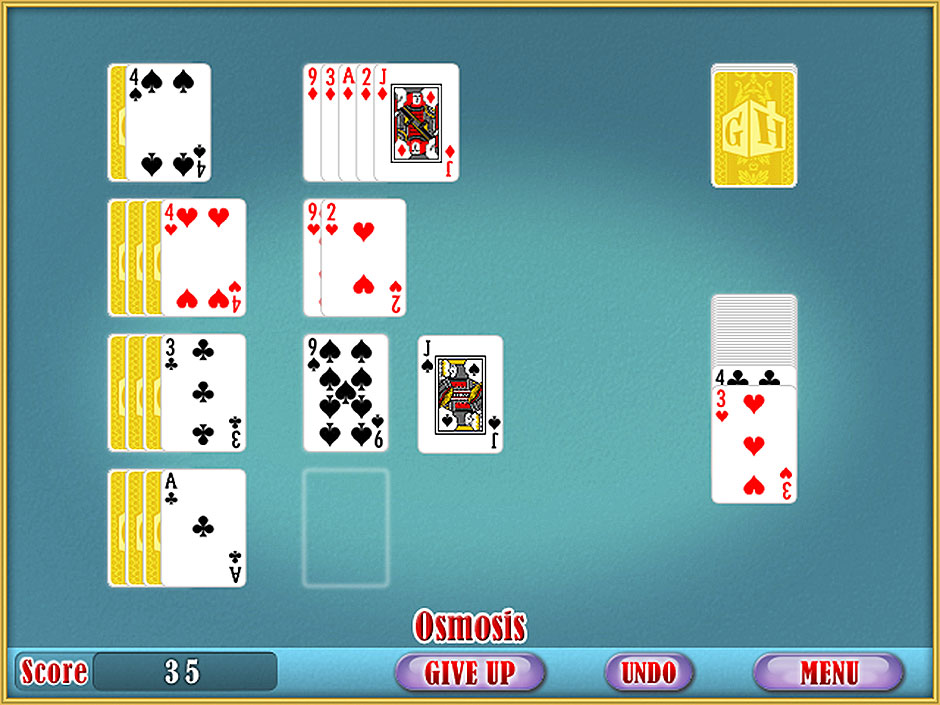 This is a Hard game played with three decks. You have 12 Tableaus, 12 Foundation spots, and 11 Reserve spots. The goal is to get all Tableau cards onto the Foundations piles, by suit, in ascending order from Ace to King. You will build the Tableau in alternating colors in descending order. 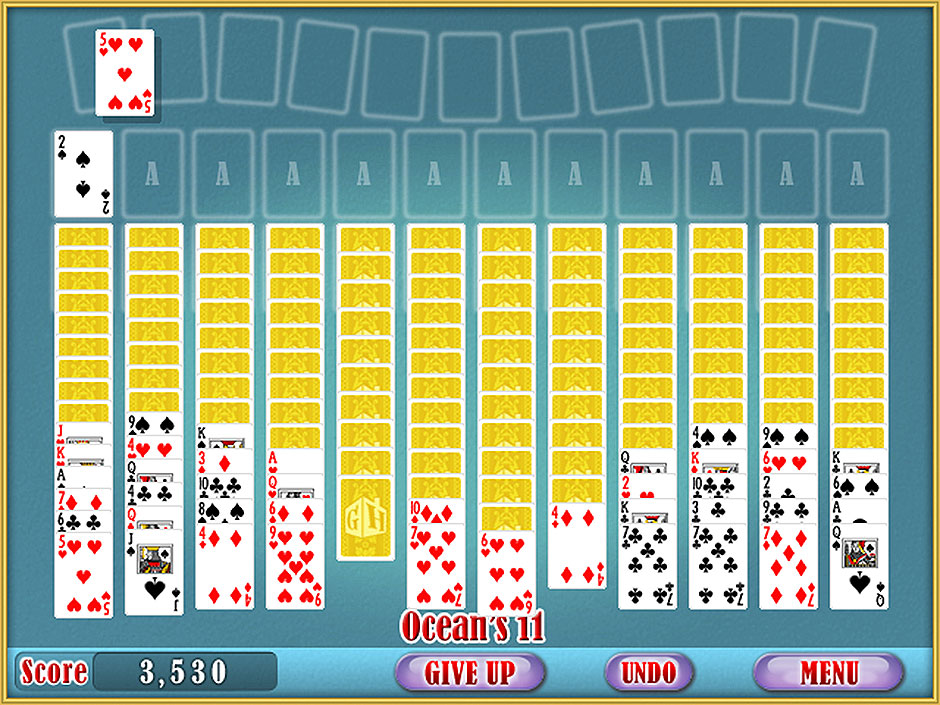 This is an Easy game. All cards are laid out, face down. Turn over two cards at a time, looking for a matching rank. You will win eventually, so the scoring is based on how many wrong matches you make in a row. This game is simple enough that you don’t need any tips or tricks here. 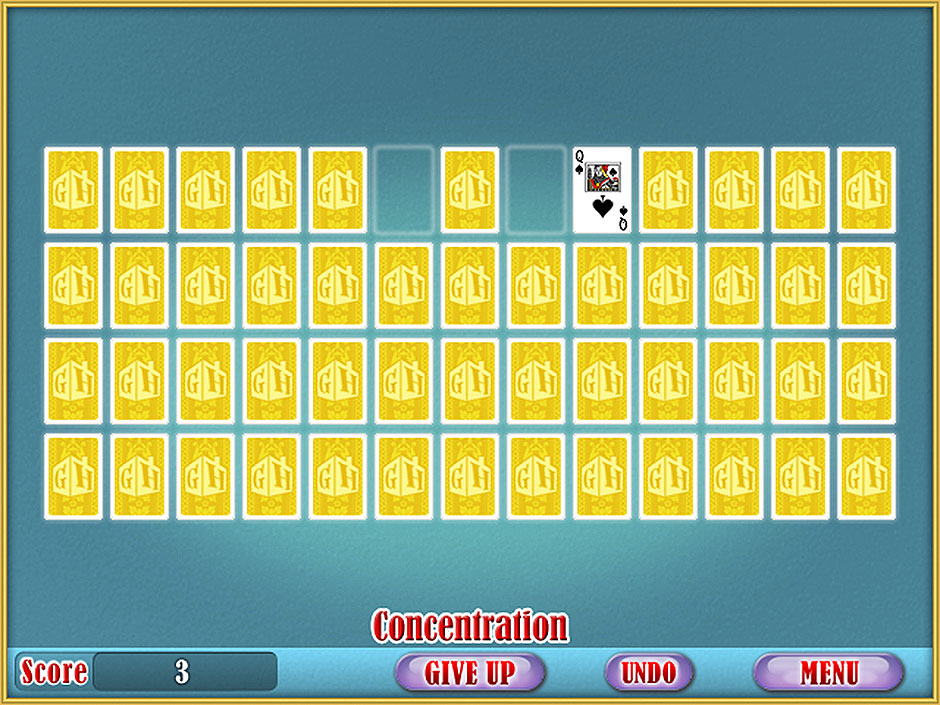 This game is rated Very Hard. The object is to build up the Foundation piles from Ace to King. The bottom card of each Tableau pile and the top card on the discard are available for play. You can move any card into a blank spot in the Tableau. 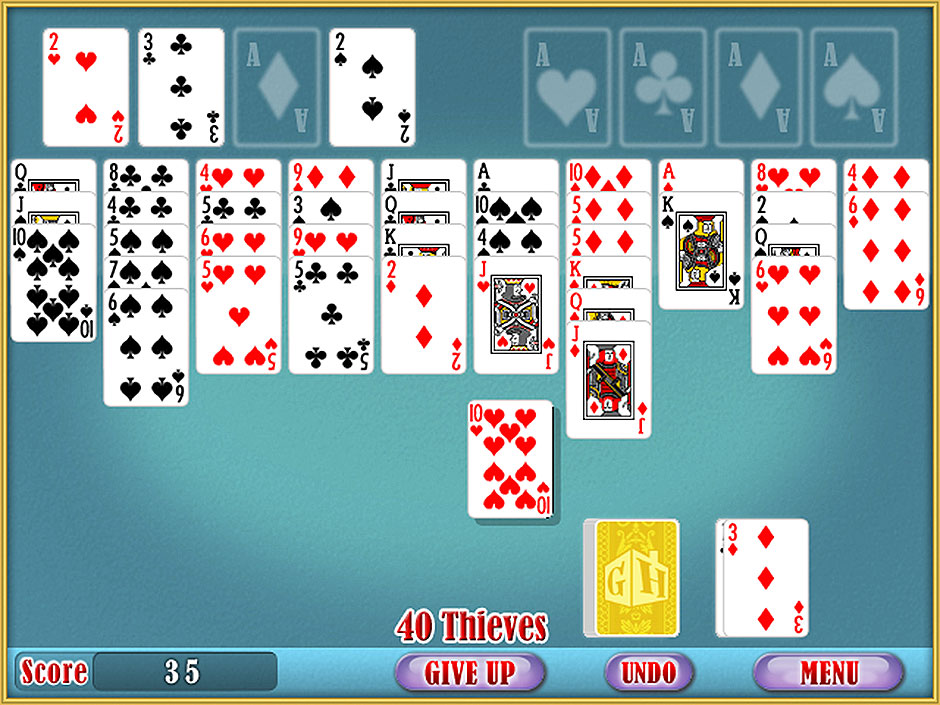 The Super GameHouse Solitaire Volume 3 Walkthrough is meant as a guide and does not contain cheats, hacks, or serials.