Running in the background of the Match 3 game is an adventure to help protect the Secrets of Olympus. Combine your powers with that of the Gods and defeat the army of enemies in 20 mini games. Secrets of Olympus 2 – Gods Among Us contains over 100 Match 3 games and boosts excellent graphics to keep the player visually entertained.

The Secrets of Olympus 2 –  Gods Among Us Walkthrough Gameplay Guide is a game manual highlighting the main rules and instructions for completing this game. Loaded with tips and tricks and hints to complete play use this guide to get through vexing levels. Divided into sections with accompanying screenshots, the guide is designed to toggle back and forth easily to access different sections of the guide. The sections are:

The game begins by asking the player to enter a screen name. This is useful because players can be added or subtracted in the Players tab. Additionally, the game tracks high score. A screen name identities who has the highest scores when multiple players set up a profile. Records in the form of a list is kept of the highest scorers in the Scores tab. A screen name also permits the player to save her progress as she advances through the 100 levels and 20 mini games and return to the game where she last left off to continue game play.

How to Play the Game

The moveable pieces in this game are called tokens. The objective of each game is to match at least 3 like tokens – of the same shape, color, and size. Once the tokens are paired in a group of 3, they disappear from the game layout. Focus on the tokens with a wooden background. The background pieces are the most valuable tokens to destroy. The objective of each game level is to complete the levels goals before you run out of moves. In short, the simple rules of play are:

Swap tokens to change places in order to make a Match 3 pairing.
Focus on the tokens with the wooden background. To clear the level, the tokens with backgrounds are the only ones that count and should be cleared first.
At the end of each level you will be asked if you wish to continue play or replay the level completed. 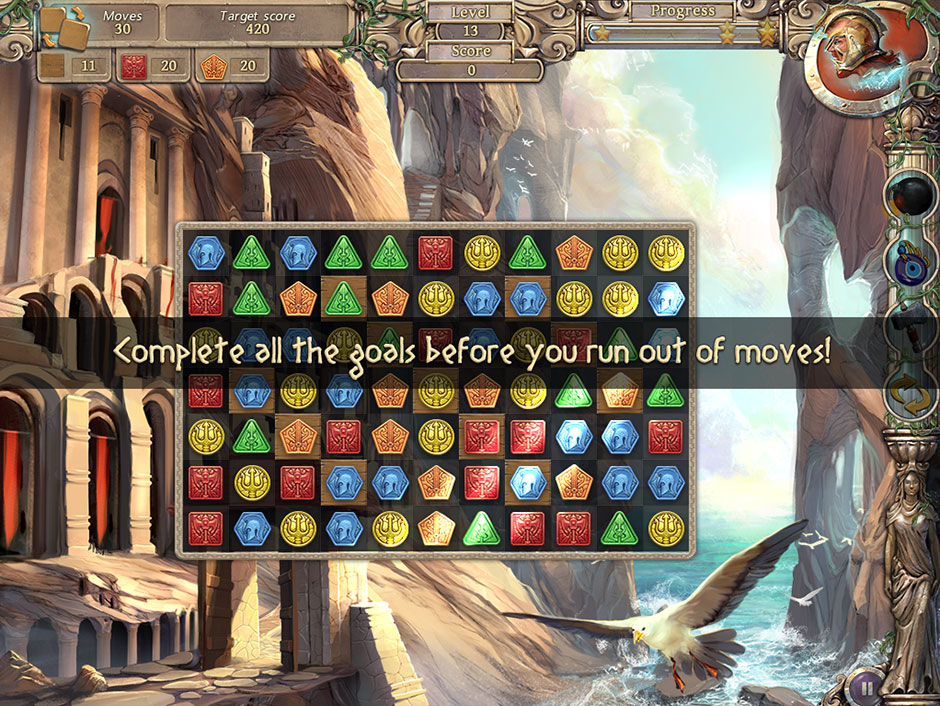 If you fail to complete the goal before making all of the available moves, game play stops and you must repeat the level in order to advance to the next level.
It may be necessary to clear tokens in areas without the wooden background in order to free up or move down a needed token. While it assists in helping clear the overall board it takes away moves for the games with a token target or time for timed games. Think about the move before making it. If you miss and are unable to complete the round, any progress made clearing the board is lost and you must restart the level all over again to continue playing. 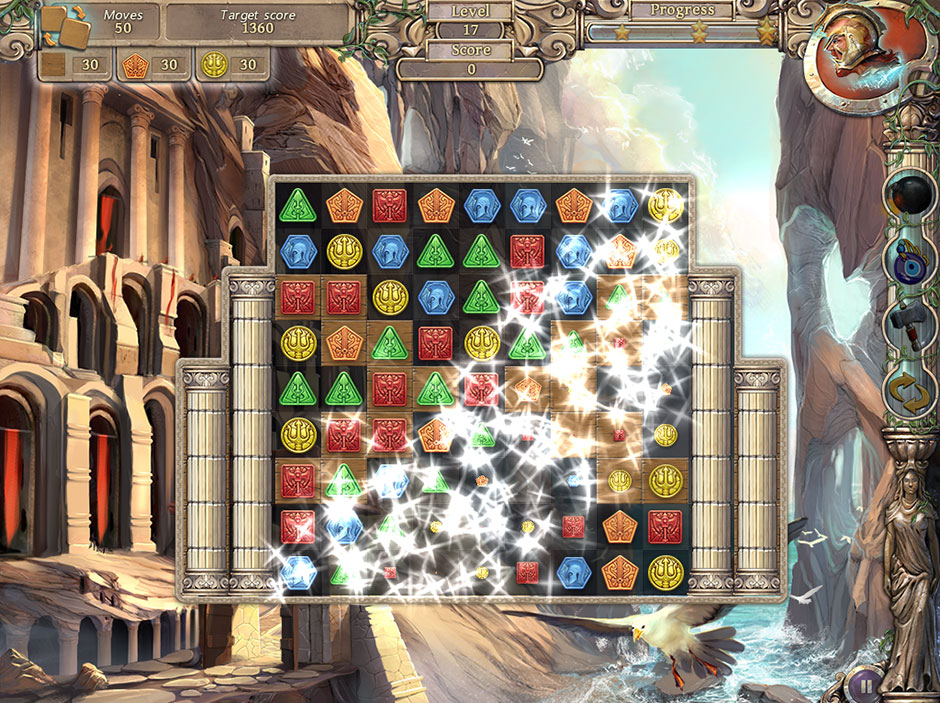 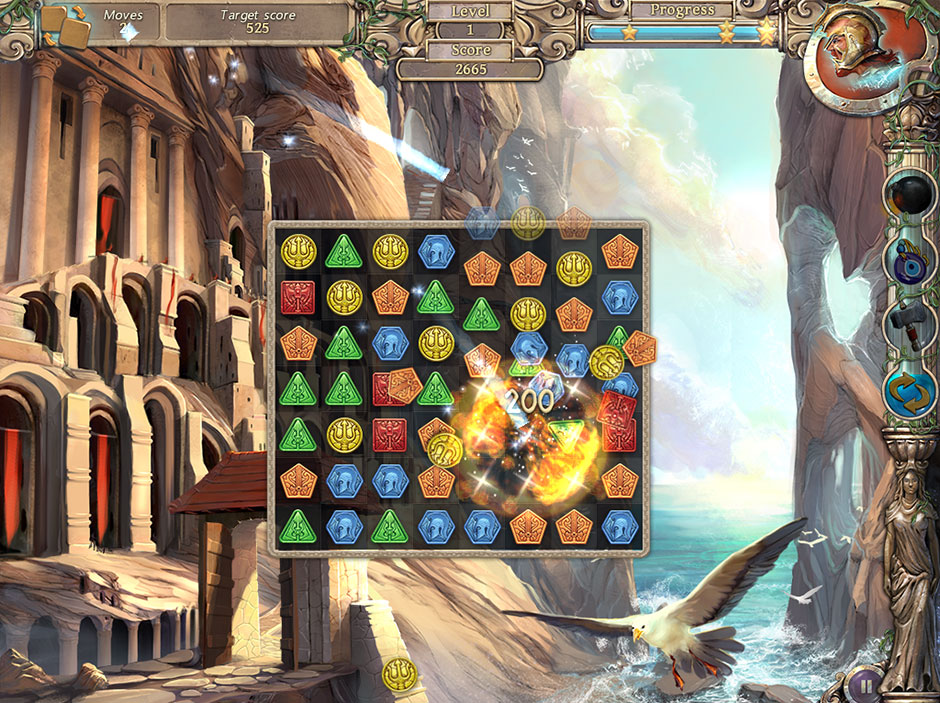 Match 4 moves are strategically valuable in levels where the goal is to clear the board in a certain amount of moves. With one move and a Special Token much of the game board is clear. Leaving additional move chances free to complete more challenging matches or pairings.

When a matching contains two Special Tokens, 4 horizontal rows are destroyed when the pairing occurs, for the ultimate wipe out experience.

The tool bar on the right hand side of the screen contains Power Ups or special tools. As gameplay progresses more Power Ups unlock or become available for selection to play. They fill up during gameplay, get used for a limited time, and then regenerate throughout the current level and subsequent levels.

The Power Ups include the Switch, Hammer, Potion, and Bomb tabs. Use the Switch button to change the positions of the tokens to bring a desired tile closer to gameplay action. Select the token you wish to switch with the other that will be replaced and click. The move happens automatically, freeing up the token for play. Use the Hammer to break a token and the underlying wooden background. Select the Hammer, next select the token you want to break with the wooden background, and lastly strike the token to eliminate the piece from the gameplay board. The last two tabs Potion and Bomb are used to clear large portions of the game board layout. Simply select the Power Up and then click on the section of the game board layout you wish to detonate the Bomb or release the Potion. Both moves wipe out a significant part of the game board layout utilizing one move. 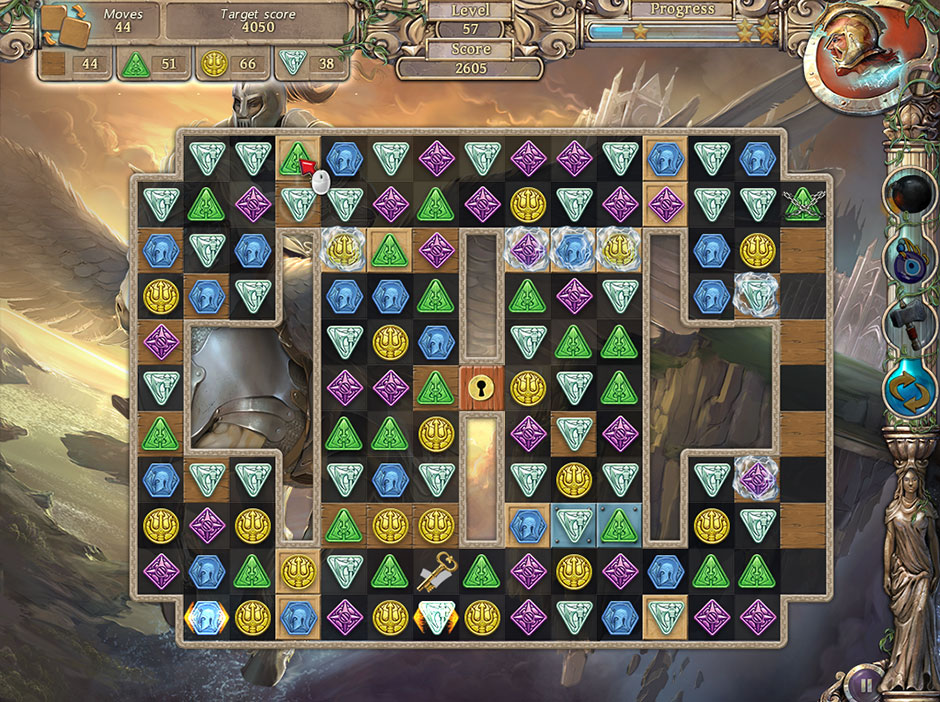 Certain levels require that a key gets collected to open or unlock another section of the level. The key generally starts at the top of the game board layout. As Match 3 and Match 4 combinations are made and the rows and columns are cleared, the key falls to the bottom row. When the key reaches the bottom row, another section of the game layout begins and to clear the level, those puzzles must be solved using the same match rules. 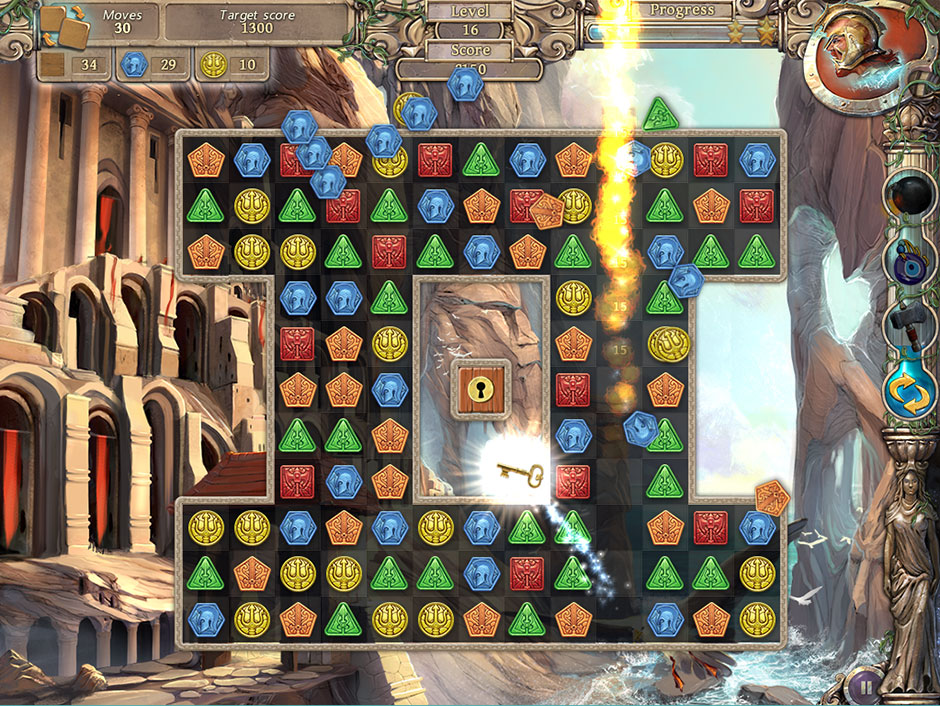 Throughout gameplay, 20 mini games are features among the 100 levels. They promote the story of helping the Gods keep the Secrets of Olympus safe. Each has a challenge that must be solved. For example, in the first mini game, rocks are catapulted to knock down scaffolding with people on it. In this battle scene the goal is to defeat the rebel army by knocking them off the scaffolding. You are able to skip all mini games. But, if successful completing helps you accumulate more points increasing your ranking in the leaders board. 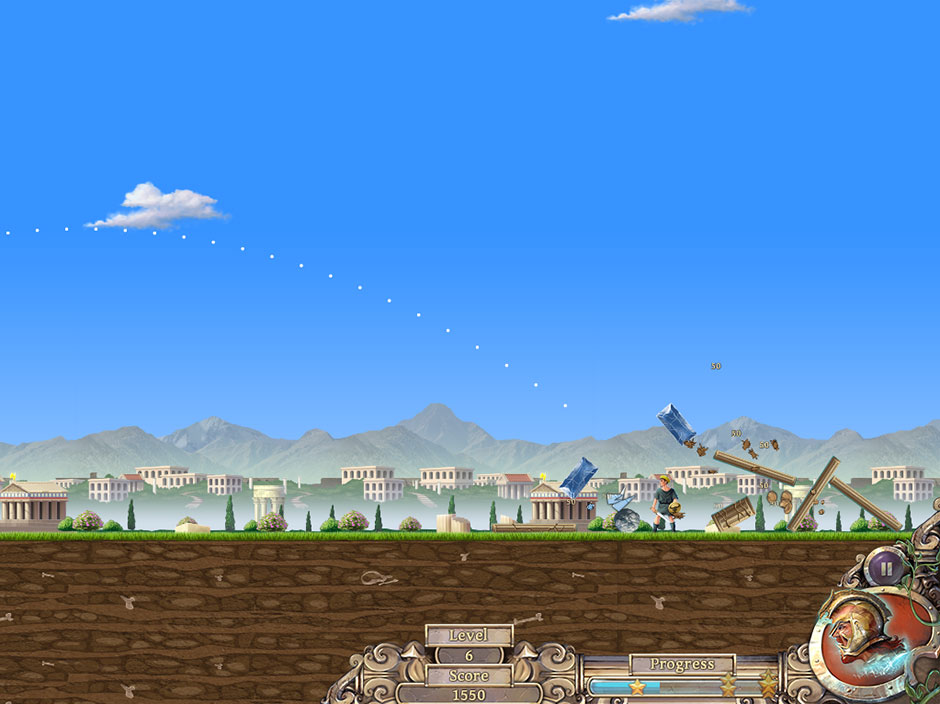 In some game layouts Greek columns appear in the gameplay board or layout. The columns cannot move and cannot be swapped with a token to clear the scene. Instead, form Match 3 or Match 4 pairings next to the column and the match destroys the adjacent part of the column. The column collapses like a pancake until the whole column is gone. The action needs to be repeated for each of the columns present in the game layout. All the other gameplay rules apply and get utilized to clear the level. 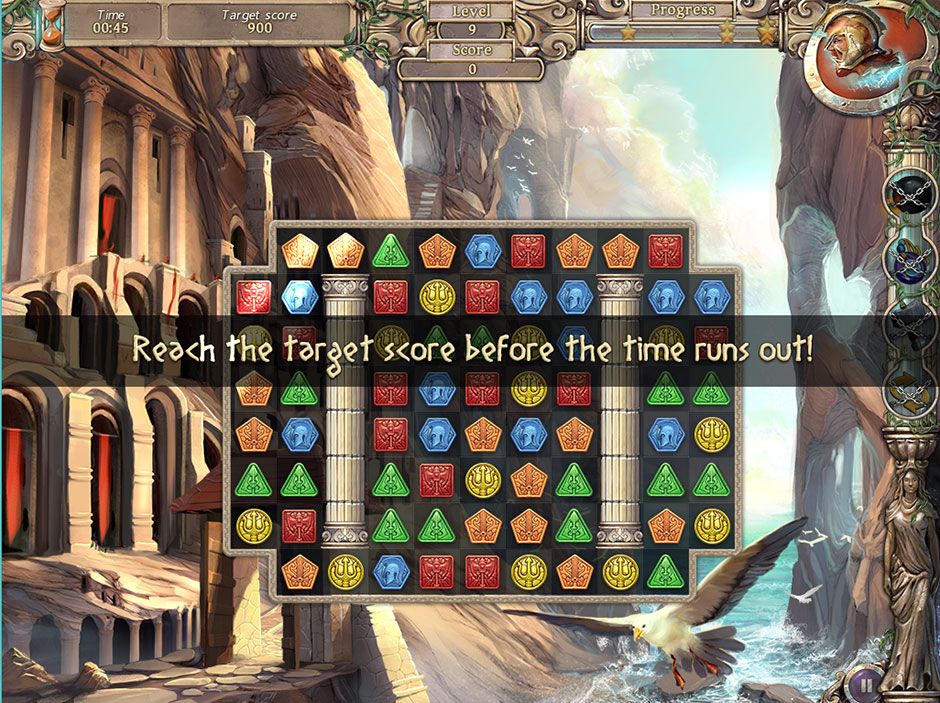 For ultimate gameplay destruction, move a Special Token with an arrow pointing down to the top of the column. Make the Match 3 or 4 pairing and watch the entire column disappear and the locked areas of the game open up.

Matching 5 or more like tokens creates a Super Token. The Super Token permits the player to select a token to eliminate from the entire game board layout. To use, simply touch the Special Token and the token you wish to eliminate and all of the tokens touched disappear from gameplay all at once.

The Super Token is an especially handy tool when columns are present in the gameplay layout. If there is a token that touches the columns on all sides when the Special Token is combined with the token you wish to eliminate, all parts of the column that contain the token will be eliminated from gameplay. The gameplay board layout, columns, and available tokens get reshuffled – making even more Match 3, 4, or 5 pairings possible.

While most of the levels are solvable within the time frame allotted or moves permitted, you may still experience a level that seems impossible to beat. Running out of time or moves and voiding the level and your progress. After about 3 continuous unsuccessful attempts, at the end of the level you will be given the option to skip the level. The player can skip it and return to it later. It will remain scoreless until the goal is completed. 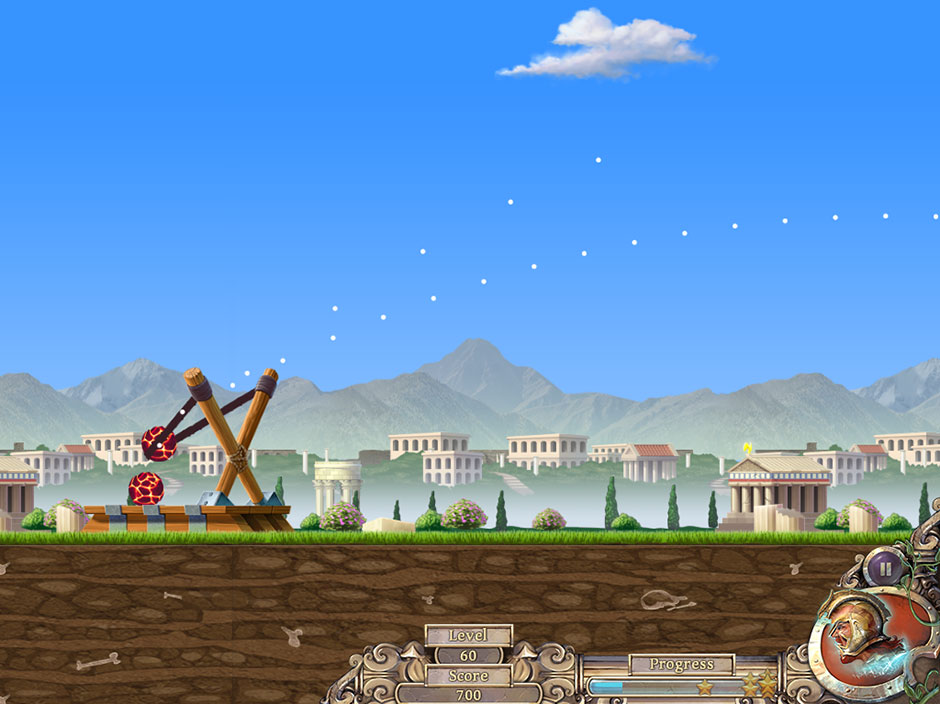 For more great tips and tricks, visit our blog!
The Secrets of Olympus 2 – Gods Among Us Walkthrough Gameplay Guide is meant as a guide and does not contain cheats, hacks, or serials.