Visit twelve exotic beachside locations around the world without boarding an airplane or forming any security lines. Solitaire Beach Season is an electronic card game that matches the rules and instructions of the traditional card game solitaire with the convenience of automatic game set-up and play. Sit back, relax, and embark on a beachside vacation journey to chase away the wintertime blues! Make sure to turn the sound on and raise the volume – during game play listen to the perky soundtrack featuring the bright sounds of steel drums to completely go to the ocean.

In Tourist mode any game level among the 120 levels can be played in order or out of order.

In Traveler mode the game levels can only be played in sequence and replayed in the order presented in the game play mode. 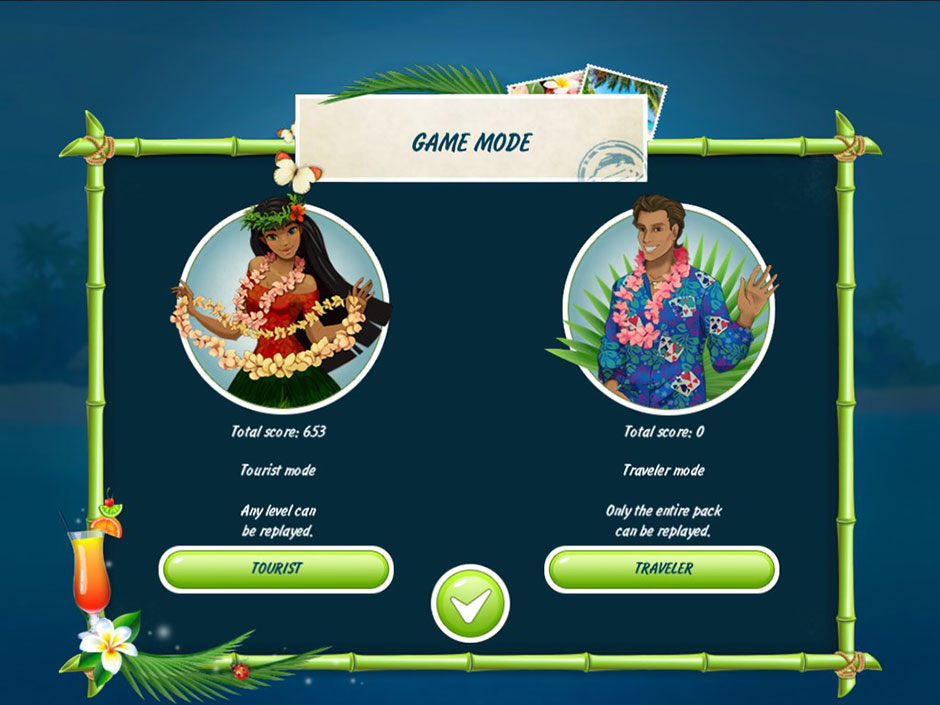 Levels are unlocked by collecting trophies.

The card or puzzle combinations become more difficult to solve as the player progresses through the 120 game levels.

Solitaire Beach Season is a one player electronic card game that utilized a 52 playing card deck.

Each deck that appears in the levels contains 52 playing cards with 13 Ranks of each of the 4 Suits in two colors: red or black.

The Waste spaces are two blank boxes next to the Reserve space that allows the player to place any visible card in the space in an effort to solve the game level. Up to two cards can be held and the space only becomes available when the cards held in the waste area are played.

The objective of the classic game play mode in Solitaire Beach Season game is to clear each of the 13 ranks until the entire playing cards on the tableau or Beach themed layout are visible, revealed, or turned over. 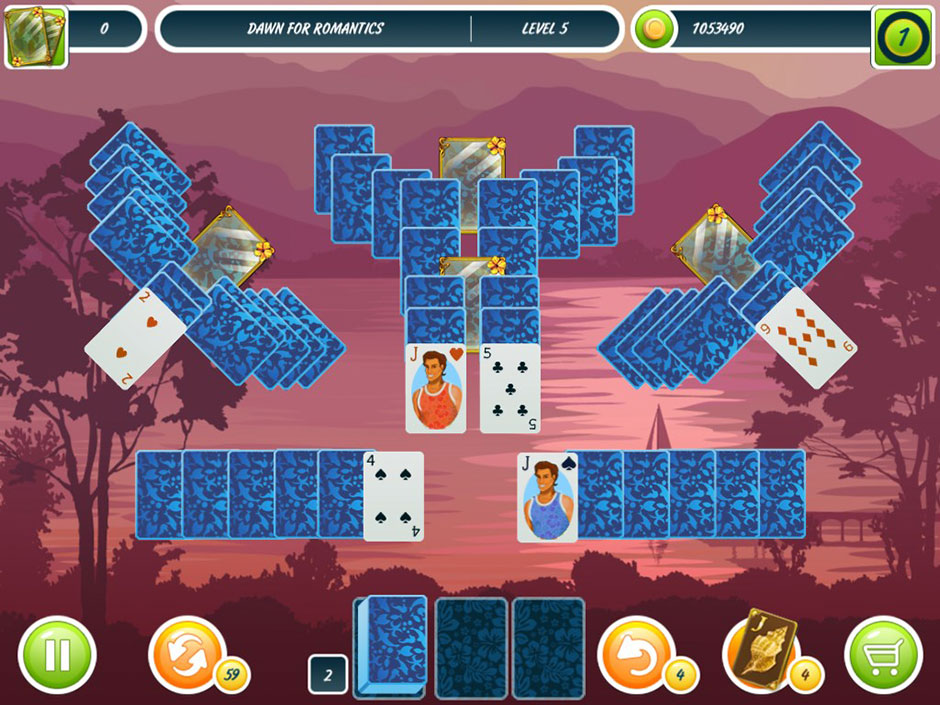 Playing cards are turned over by clicking on the selected playing card with the pointing device (i.e. mouse, stylus or finger).

The color of the playing card suit is not important. Focus on the rank and clear them in ascending order.

Access playing cards in the Reserve column when the player runs out of moves to make with the visible cards.

Place revealed cards in the Waste space to uncover up to two hidden playing cards. Waste spaces become available once the playing card is selected and cleared.

Some of the revealed playing cards are highlighted in gold. Make sure you clear those playing cards. See the Rewards section below contains a more detailed explanation on how to collect the gold cards, what they are, and how to use them.

At the end of each level, the player is provided with stats on her performance. Among the stats complied are: special cards or Rewards found; current score; and top score. The player is also given the option to continue onto the next level, replay the previous level, or track game progression through the levels. Keep in mind that the player must clear or successfully complete the 120 levels to complete the game. As the player progresses through the game, the Beach themed levels become more difficult to solve. 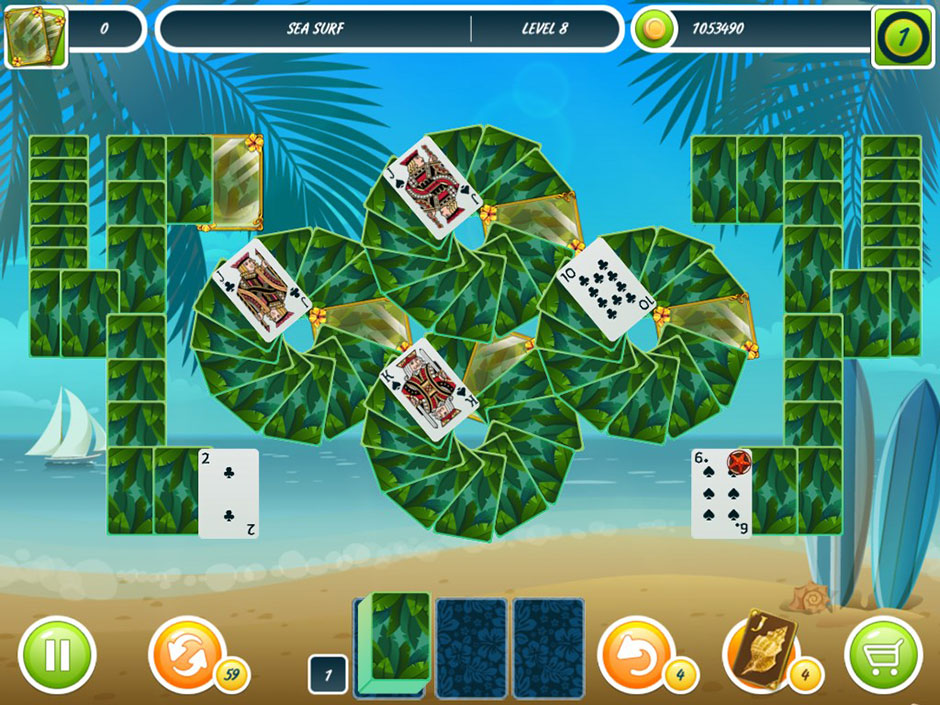 Games become more difficult as the player moves through the levels. 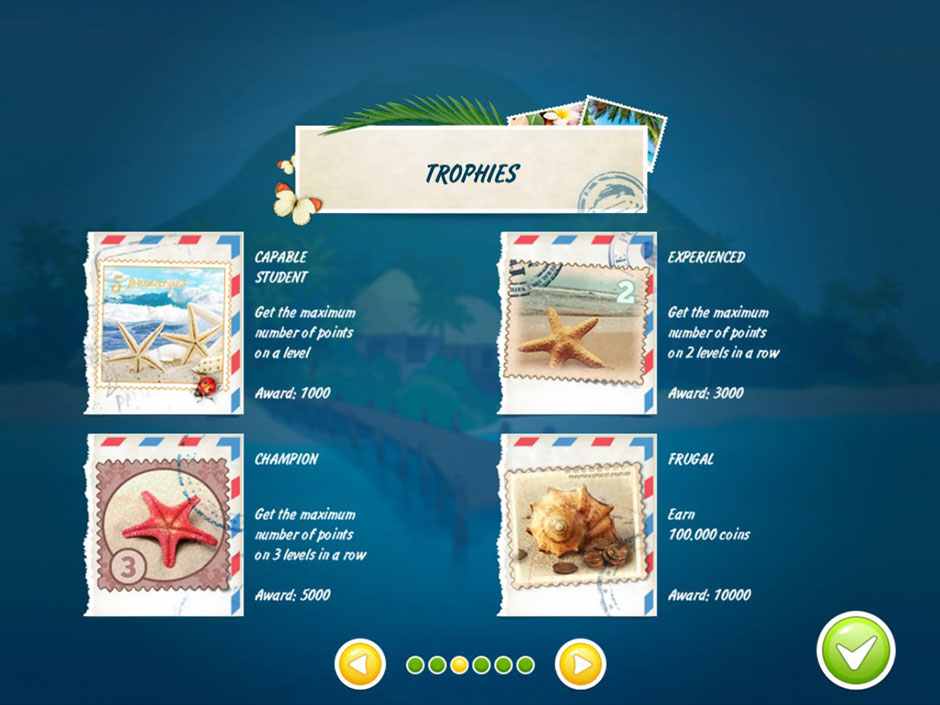 The player is able to advance to the next Beach themed level faster because a special multiplier is included in this game play mode that clears Ranks in pairings across all Suits increasing overall score and rewards.

Both the Classic and Unconventional game play modes permit players to collect Rewards. The Rewards appear in the game as Golden playing cards. When the player clears the tableau she collects the Golden playing cards and then the player is able to purchase Mulligan, Shuffle, and Joker Rewards. Each of these Rewards enable the player to essentially cheat during game play and keep the momentum going as Ranks and Suits are cleared. 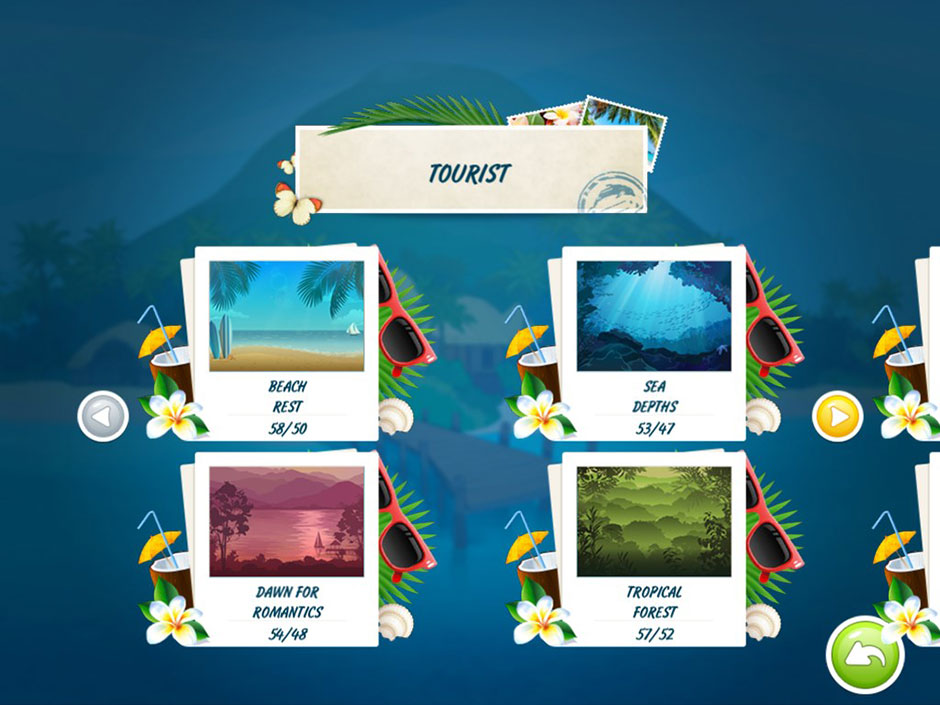 To recap, Solitaire – Beach Season contains 120 unique Beach themed game levels across 12 locations. Play in Classic or Unconventional game play modes paying attention to the clearing or collection of pairs to gain the maximum amount of points. Use Rewards to purchase Mulligan, Shuffle, and Joker cheats that permit the player to clear the game level faster. As the player completes level, trophies are unlocked that provide access to new locations. Pay attention to the gold cards, collect them all to receive the maximum level of Rewards purchases. Lastly, in addition to the visual delight of the Beach themed levels and locations turn on the music, tap your feet. A holiday adventure is before you – Bon Voyage!

The Solitaire Beach Season Walkthrough Gameplay Guide is meant as a guide and does not contain cheats, hacks, or serials.