It’s a crazy world out there. They’re everywhere, living among us, watching our every move. Your significant other, your closest friend, your childhood heartthrob – any or all of them could be wizards in disguise. And in the land of Legend of Gallant, gameplay walkthrough is king, for it is the only thing that can keep their evil actions at bay. Your task is to harness these tips and tricks, read these guides, and cheat death at the hands of those nasty wizards by building structures and matching gems.

Legend of Gallant is a Match-3 puzzler. This means that the object of the game is to match three or more sets of colored gems, vertically or horizontally. Matching three or more gems will result in them disappearing from the board, with more gems taking their place by falling. Matching four or more will result in the creation of Wizard Torches or Wizard Bombs. Occasionally, additional tasks will be added, such as guiding a specific tile to the bottom of the screen or fighting off telepathic wizard attacks. 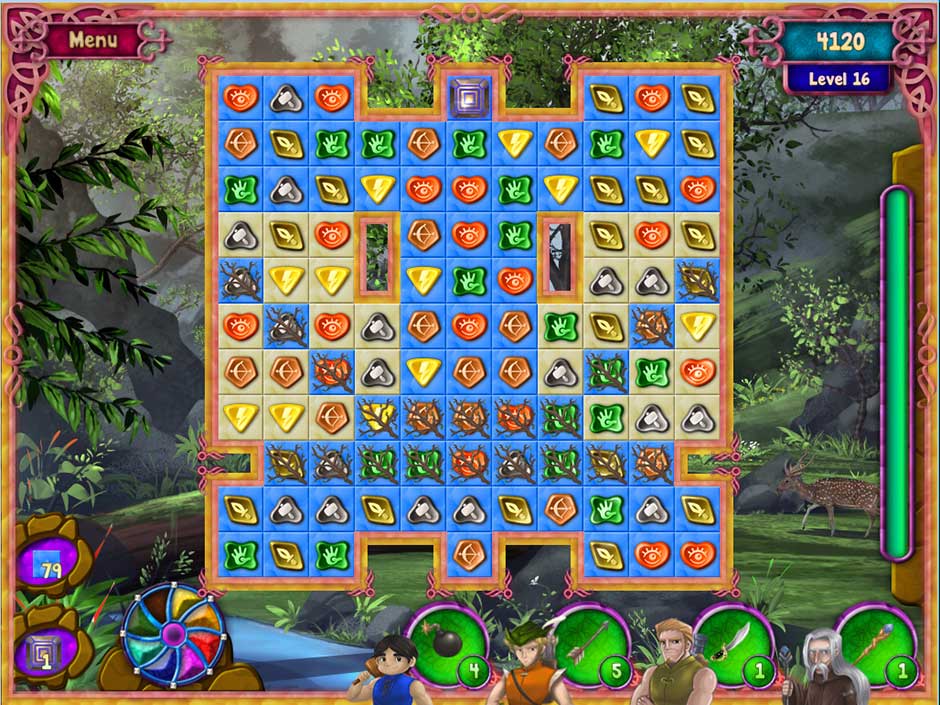 There was a time before the modern day, when wizards ruled supreme. An iron fist clenched the world, but a group on benevolent wizards called The Ancients sealed up all magic energy into a magic crystal, hoping to contain the power and keep the world safe from those no-good wizards. However, Irimar the Warlock, the least good of all the wizards, shattered the magic crystal and released magic across the land once more, terrorizing the common folk. Now it is up to Gallant and his band of adventurers to stop Irimar and the other wizards by constructing Altars out of Mithrial Stone and summon The Ancients, so they might seal all the world’s magic once more. 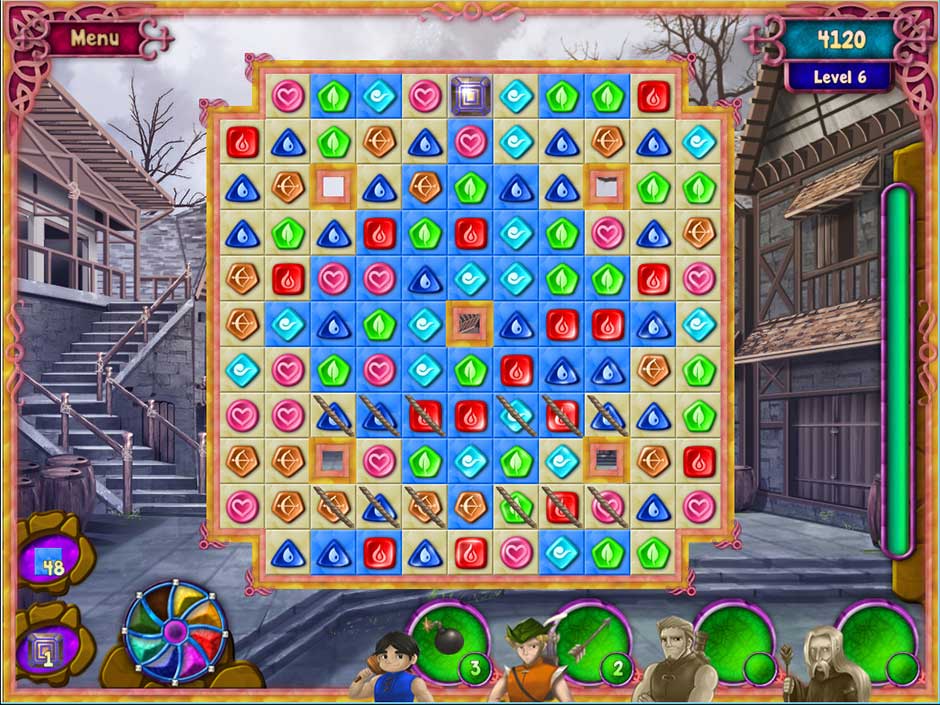 Lightning Gem: This triangular yellow gem summons the diving lightning, often seen erupting from the hands of space wizards like Sheev Palpatine. Connect three of these to earn points, but you can get a Wizard Torch with four and a Wizard Bomb with five. Also, it fills your Amulet!

Leaf Gem: Originally exclusive to the Far East, this green pentagon gem was localized for Western wizards and their Amulets recently. It harnesses the power of trees, the Earth’s bones, and matching three, four or five of them will grant points, a Wizard Torch, and a Wizard Bomb respectively.

Water Gem: Popularized as the official gem of noted wizard den Tio Esteban’s Aqua World, this pyramid blue gem harnesses the power of water and fills the Amulets of adventurers. When water enters a cup it becomes the cup; when it enters the teapot, it becomes the teapot. Water can flow, and it can crash, and it can also create points, Wizard Torches, and Wizard Bombs when matched in groups of three, four, or five.

Heart Gem: The often overlooked Heart Gem is a pink circular gem that allows wizards to commune with animals, like famed Planeteer Maa-ti. This gem, much like the other color gems, fills your Amulet and rewards points when matched in threes, Wizard Torches when matched in fours, and Wizard Bombs when matched in fives.

Tao Gem: Little is known about this purple hex gem with a little squiggly inside it. What little information gained from the secret wizard inner circle we’ve managed to discover is that matching three of them will make points, four will make Wizard Torches, and five will make Wizard Bombs. In addition, matching these gems will help fill your Amulet. 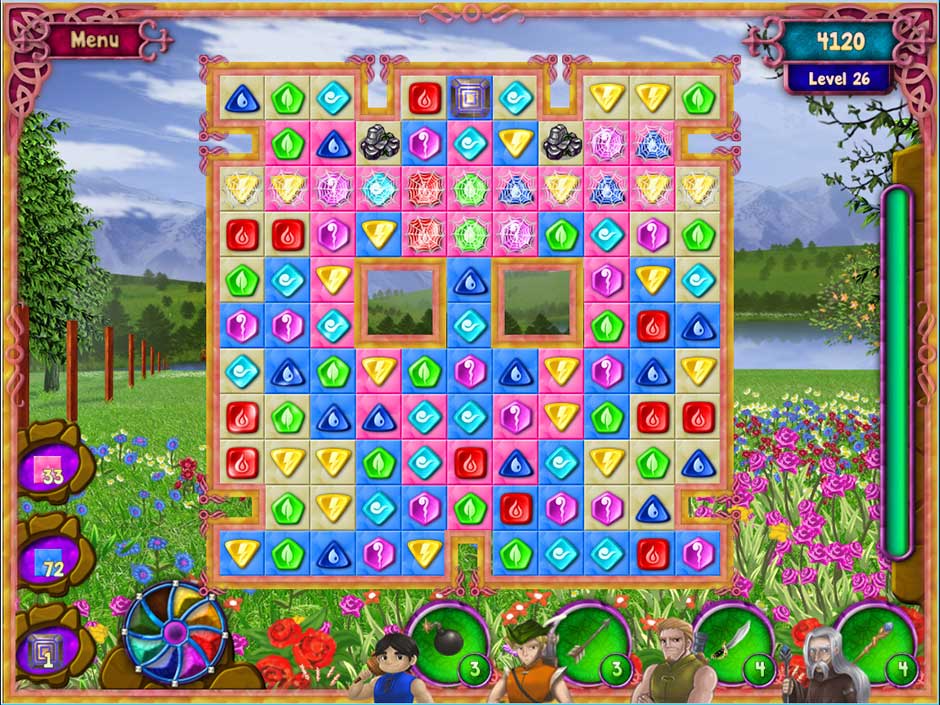 Mithrial Stone: This rare mineral does not generate Points, Wizard Torches or Wizard Bombs, because it is not an evil wizard creation, but a natural bounty for the realm of normies. When these rare materials appear in your view, guiding them to the bottom of the screen will allow you to collect the Mithrial within, furthering your own aims.

Wizard Torch: These powerful flame pockets, shaped like a fire flower, are created when four color gems are matched. They fill the spot of one color gem on the board, and when swapped with any gem it will combust. The effect of this combustion is that all surrounding gems will be consumed, up to a maximum of eight.

Wizard Bomb: These unholy instruments of chaos are what wizards are infamously known for. Shaped like a lightning bolt, matching five like color gems generates one of these genocide devices, which fills the spot of one gem on the board. Swapping the Wizard Bomb with any other color gem will activate its deadly lightning, destroying any color gems to the direct North, South, East and West of it. Use at your own risk.

Amulet: This powerful artifact fills when you match like color gems. Once it is at capacity, click on it to unleash powerful wizard magic to destroy random color gems on the board. Senseless violence is the norm in a post-wizard society.

Magic Crystal: Once a vessel for the world’s magic, the magic crystal created by The Ancients was meant to be a deterrent for wizard violence. However, recent actions by Irimant the Warlock have shattered the magic crystal into millions of tiny Color Gems, releasing their power into the world once more.

Gallant: The titular hero Gallant is just a man out to do what’s right: rid the world of wizards. He learned a long time ago that wizards offer nothing to society but terrible music and higher crime rates, so he teams up with an elite crew of wizard hunters to defeat the evil warlock named Irimant. 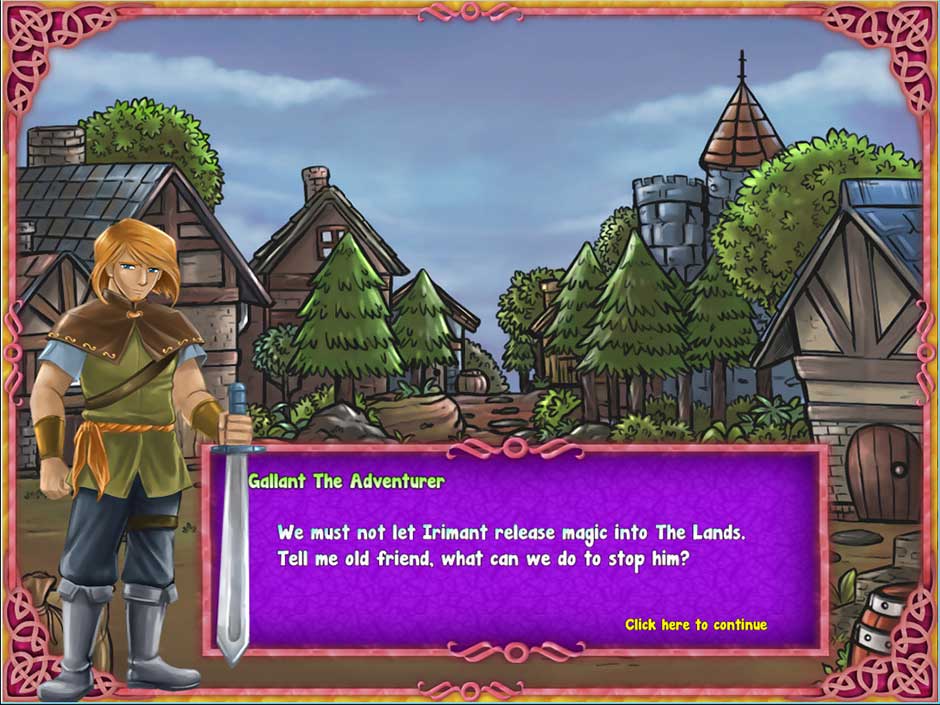 Dorant: Faithful friend and loyal companion to Gallant, Dorant is the man to go to for Mithrial and Mithrial accessories. He doesn’t feel nearly as passionate about wizards, though: he’s just in it for the Mithrial. His primary role on the battlefield is to locate Mithrial to be used when constructing buildings.

Sirion the Wizard: Once a ruthless wizard murderer and fear monger, Sirion has turned over a new leaf after meeting the brave adventurer Gallant. As the party’s resident expert on wizards, warlocks, and magic crystals, it is Sirion who gives Gallant’s party the idea of building eight Altars in order to summon the power of The Ancients and restore the magic crystal.

Irimant the Warlock: Irimant is a wizard so evil people don’t even call him a wizard anymore, they call him a warlock. Corrupted by evil and power, he smashed the magic crystal that contained magic, releasing the wizard epidemic on the world once more. Public enemy number one.

~ Occasionally, the center tiles will be highlighted in blue at the the beginning of a level. Try and match color gem combinations with the blue highlighted tiles: they’ll give a small point bonus.

~ When trying to obtain Mithrial Blocks, don’t be afraid to use Wizard Torches or Wizard Bombs. Though deadly and powerful, their detonations will not destroy the Mithrial Blocks, meaning they can easily clear a path to the bottom.

~ Your party members can gain special moves when you advance far enough in Legend of Gallant. Once charged, these special attacks can be devastating, taking out multiple gems and earning lots of points. 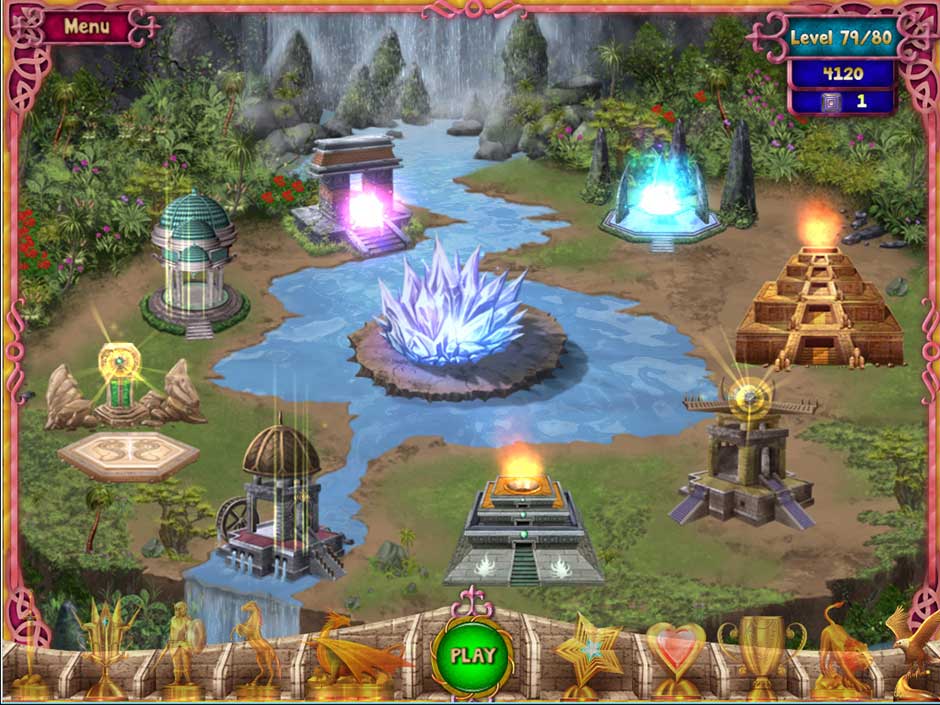 I can understand the appeal of wizardry. Unlimited access to power and magical growth with limited regulation is an intoxicating proposition. However, wizards are evil soulless monsters committed to advancing the suffering of others. This is inexcusable, meaning the indifference of those capable of helping is a condemnation as bad as if they performed the nasty deeds themselves. This is the trial a hero faces: inconvenience for the sake of others. Use the skills laid out in this guide: study the different gems, learn about the world of wizards and the adventurers who inhabit it, and never stop matching those gems. Those altars won’t construct themselves, at least not with this level of magic power, so get to matching!

The Legend of Gallant Gameplay Walkthrough is meant as a guide and does not contain any cheats, hacks or serials.