You know who get a bad rap? Mayans. First, they get immediately dismissed as evil by ideologues, just because they killed humans for sacrifice and also cut off the heads of human sacrifices and also they played basketball with the cut off heads of the human sacrifices. If it weren’t for the Mayans, we wouldn’t even have basketball, or the number zero. Then, everyone thinks they tried to cause the end of the world or something. Do you know what the Mayans did do? They inspired the game Jewel Quest, a match-3 puzzler! Match colored symbols to get points and have a great time doing it. Laugh like nobody’s watching, eat like nobody’s hungry, and read this walkthrough of Jewel Quest for a breakdown of the gameplay, descriptions of a few items, a walkthrough of a typical level, and some fun Mayan tips and tricks!

Mayan Tip #1: Don’t get any blue paint on you! The Mayans would frequently cover sacrifice victims with blue paint before committing the act. Just stay away from blue paint and you’ll be fine.

Jewel Quest is a puzzle game where the goal is to swap objects on a board to match 3 or more of the same object. Objects can only be swapped if they result in a match; otherwise, the move is illegal. Getting a successful match will cause the pieces to disappear from the game board, with more pieces falling from the top of the board to take their place. Getting matches will also reward points, with more points given for higher matches of objects. Additionally, falling gems after a successful match will occasionally cause extra matches, which will grant bonus points.

In order to complete a level, matches must be made on every tile on the game board. Every time a match is made, the tiles on the game board the matches were made on change color to gold. Once the entire board is gold, the round is over. Waiting to finish the level and spending more time getting matches on spots already colored is a valid strategy, but there is also a timer counting down for each level, requiring you to be mindful of how much time is left. Once the level is over, all your points are tallied up and you will receive a score.

Mayan Tip #2: The Mayans used three different calendars to denote time. Recently, one of the Mayan calendars reset at the end of 2012. This calendar predates the time the Mayan Empire was founded, which has led many anthropologists to believe they may have been inspired by a previous civilization’s calendar system, if not stolen outright.

Emerald: A very rare jewel with a greenish hue, this gem is commonly found on the game board and is a popular material for decorative jewelry. Along with changing the color of the board, making matches of three or more will result in points being given.

Ruby: This square-shaped gem has a dark, blood-red hue, and is very mysterious. The air of mystery and subtle sanguine color has led to this being a very popular jewel facet, and making matches with three or more will give points, as well as changing the color of the board.

Diamond: Commonly found in Africa, this transparent gem has been found all over South America as well. It is renowned for its hardness, and has many practical applications in the construction of tools such as table saws or jackhammers. However, it is also a very popular facet for jewelry (rings especially), and will grant points as well as change the color of the game board when matches are made of at least three.

Shrunken Head: These heads most likely belonged to prisoners of war or slaves. They were painted blue and sacrificed on an altar overlooking the entire village. While often times the Mayans used disembodied heads as balls in their proto-basketball game, these heads have been shrunken with chemicals and fitted with gems in the eye sockets. Perhaps this was meant as a ward for evil, or maybe it was a particularly perverse piece of jewelry; whatever the case, matching three or more shrunken heads on the game board will give points and change the color of the board tiles.

Gold Coin: These coins are made from gold that has been melted down and filled into molds so they can take the form of circular coins. Commonly used as currency when bartering with neighboring tribes and civilizations, these coins are adorned with the visage of the mighty Quetzalcoatl, or the Mayan god of death. Matching these, similar to matching the other precious metals on the board, will result in the changing of the board’s color and the administering of points to you, the player. However, this can only be done if the match is of at least three diamonds.

Mayan Tip #3: Mayan royalty underwent primitive cosmetic surgery at a very young age. Babies’ foreheads would be flattened and the nose would be pronounced so it would more closely resemble a beak. That’s pretty messed up!

Here is a detailed walkthrough on how to complete a typical level of Jewel Quest. To start, swap an Emerald with the Ruby above it to create a match of three Emeralds, clearing some space and coloring part of the lower-left of the game board with gold. Then, right next to where you made the previous match is a Gold Coin that can be swapped with another Ruby to create two matches of three, removing a total of five gems and coloring an additional two tiles of the game board.

Continuing down the lower-right side, swap an Emerald with a Ruby to create a match of three Rubies. At this point, the falling pieces will allow you to make some additional matches with Gold Coins and a few Diamonds. After five or so more matches, the entire bottom-right of the game board should be colored gold. Fortunately for you, some of the matches made on the bottom have resulted in subsequent matches being made on the top of the board from falling pieces.

Seeing as some progress has already been made on the top-right of the game board, focus on that section for the time being. After making a match of Diamonds on the bottom, a match of four Gold Coins can be made on the top, resulting in four more spaces on the board being gilded and a subsequent cascade match from falling gems. Immediately after, swap the Diamond in the very top-right of the game board with the Emerald next to it and you will form another match of three diamonds, coloring two more spots on the board. With a few more matches involving Rubies and Shrunken Heads, the entire right side of the board should be covered.

Now for the left side of the board. Fortunately, some of the work you’ve done on the bottom earlier has colored a good portion of the bottom-left, so the majority of the work needs to be done on the top-left. In this case, the recommended plan is to make as many matches as possible on top first, and then making matches on the bottom to get some fresh gems to work with on top. This way, if one section gets tapped out, there’s another portion of the board to make matches on.

When you’ve got to the point where only two or three more tiles are needed to change into gold to beat the level, take stock of how much time you have left: Any more than half, and you should try and get matches in the areas you’ve already covered in order to bolster your score. If you have less than half of your allotted time remaining, you should probably stick to making matches on that side of the board in order to set up the match needed to clear it. If all goes well, you should have completed your first round of Jewel Quest with a healthy amount of points and some time to spare. Good job! 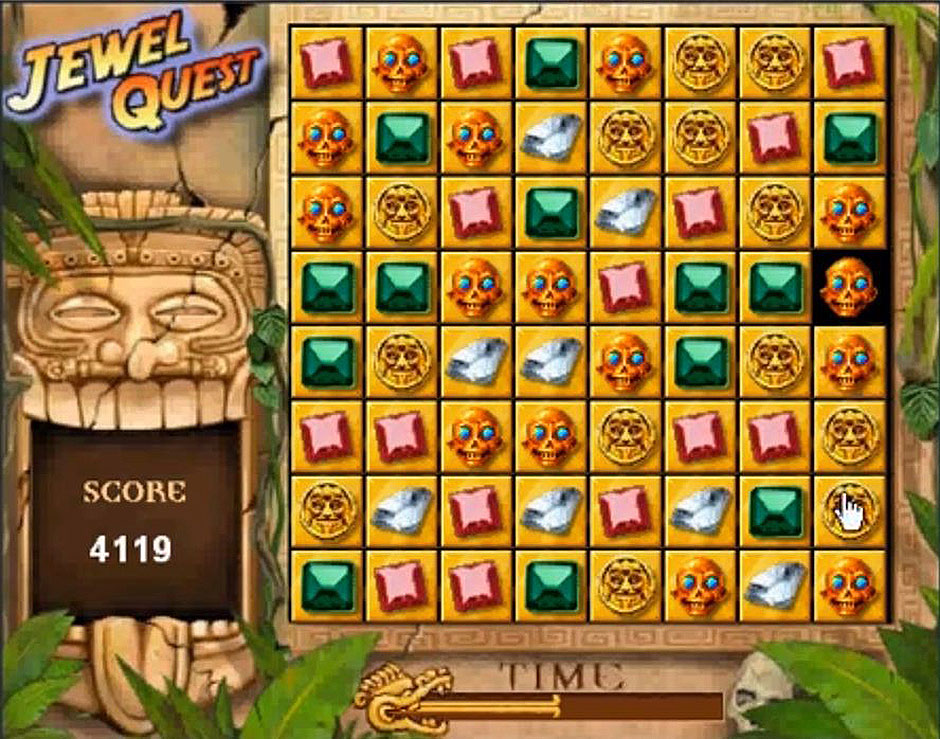 Mayan Tip #4: The Mayans, as savage as they can appear, were excellent surgeons. They had highly advanced medical techniques, and would even make sutures for stitching up wounds. The secret? Human hair! 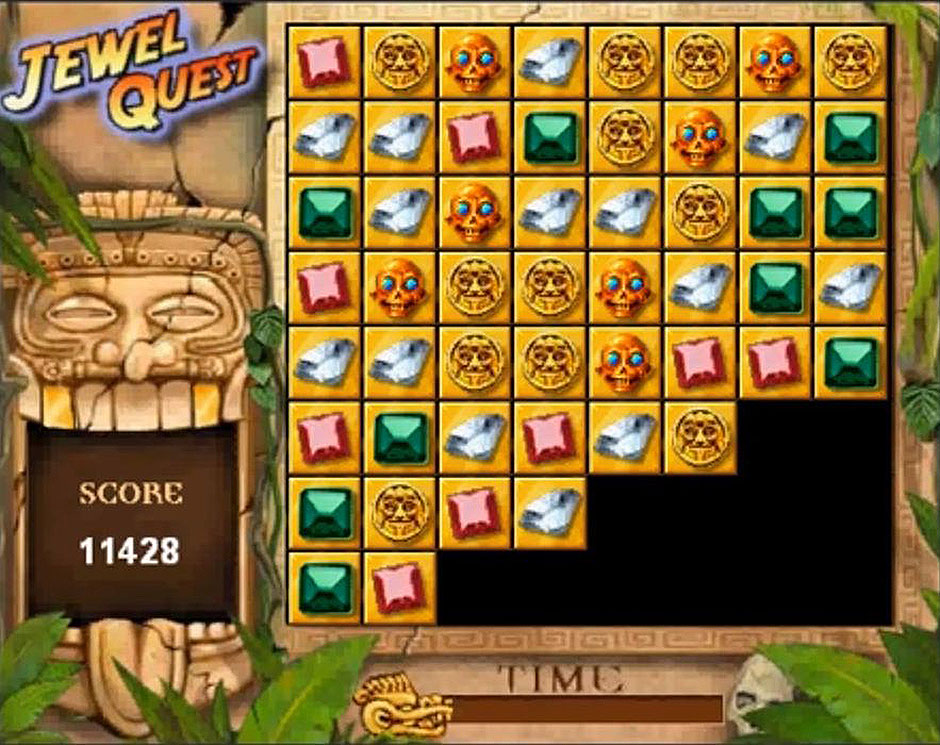 Hopefully at this point in your journey you should have realized that the Mayans, for all their faults, were actually not that bad. They had quite a lot going for them, and are even still popular today in some parts of South Africa, with indigenous peoples practicing ancient Mayan traditions. No human sacrifices anymore, though: they just use chickens! With the help of this guide, you now know the different valuable gems that can be swapped to make points, and you should know the basics of a standard level. Enjoy!
Congratulations! You’ve completed our Jewel Quest Walkthrough!

For more great tips and tricks, visit our blog!
The Jewel Quest walkthrough is meant as a guide and does not contain any cheats, codes, or serials.