The ever popular bubble shooter game is back with a punny new name – Game of Stones. This guide explains the basics and provides some tips and tricks for completing the game.

As explained by the opening cartoon, you are an apprentice wizard that accidentally got teleported to a dangerous location instead of the simple exam site. Now, you must fend off approaching creatures by connecting three or more blocks of the same creature.

The game has eighty levels of block smashing fun, divided into groups of ten levels. These groups are laid out on a board similar to Candy Crush Saga and games like it.
Completion of each level in the game results in the awarding of one of the eighty crystals needed to return home, along with a rating of one, two, or three stars. The exact star count depends on the number of moves made, not the time taken to complete it.
Completion also rewards a player with a score based on the number of blocks destroyed, with a multiplier based on the star rating. Gold equal to about 15% of the final score is then awarded to the player. The only apparent purpose of gold is to complete an achievement.

The blocks are color coded for ease of play. Jack-o-Lanterns are orange, skeletons light blue, etc. Each of the block types are drawn with a cute, goofy little face. On most levels, once a block type has been cleared off the board, that block type won’t appear for the rest of the game.

There are some alternate block types used in the game. Ice blocks won’t break unless the block above them does, while chalices “pop” if the block beneath them is broken (and will pop if they are added to a new row with no block below them). There are also stones on some levels that prevent new blocks from appearing in those columns 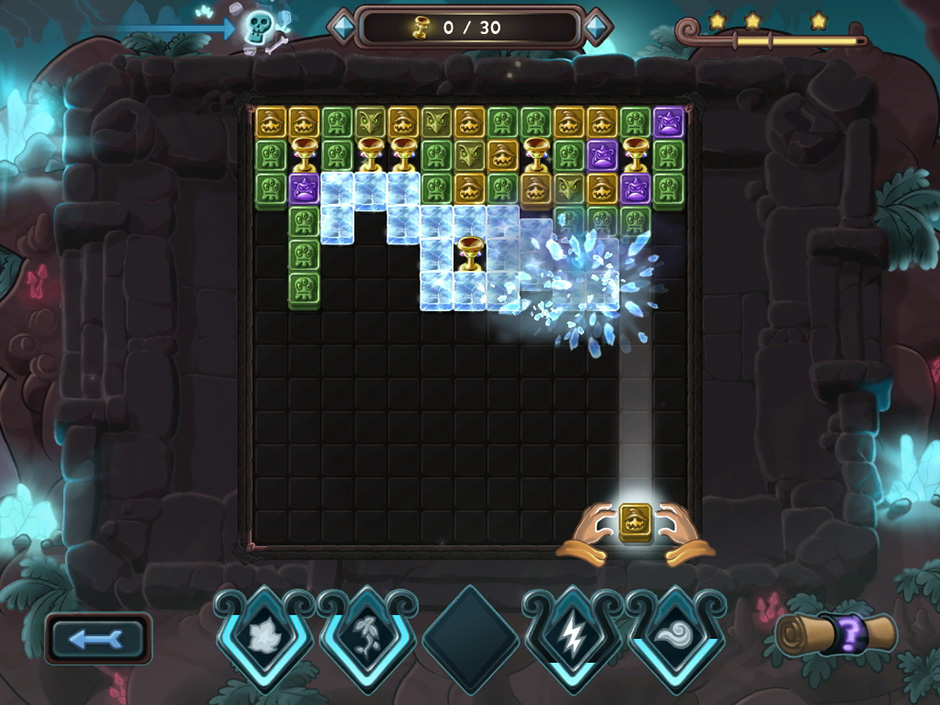 The other slots across the bottom are the spells, which function like cheats and transform a block into a useful effect. The Fireball is unlocked when reaching level 11, and blasts away a group of blocks. The Vine is unlocked at 21 and eliminates the targeted block in spite of any obstacles. 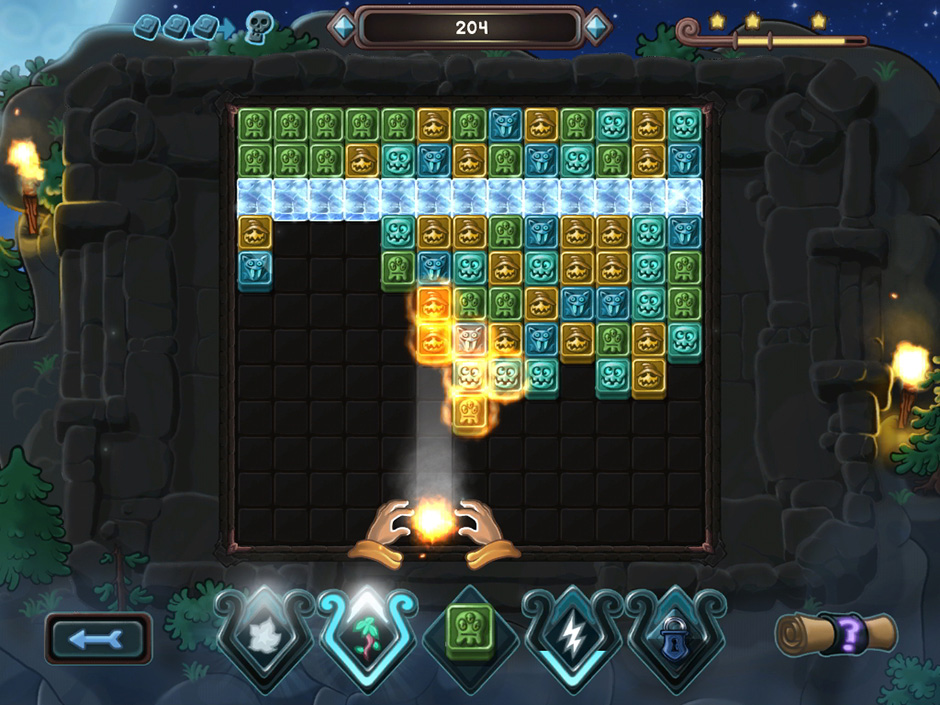 The game also includes a number of achievements. Many of these fall into the usual categories- complete this many levels, use that spell so many times, etc. A majority of the achievements will be completed by playing through the game normally. 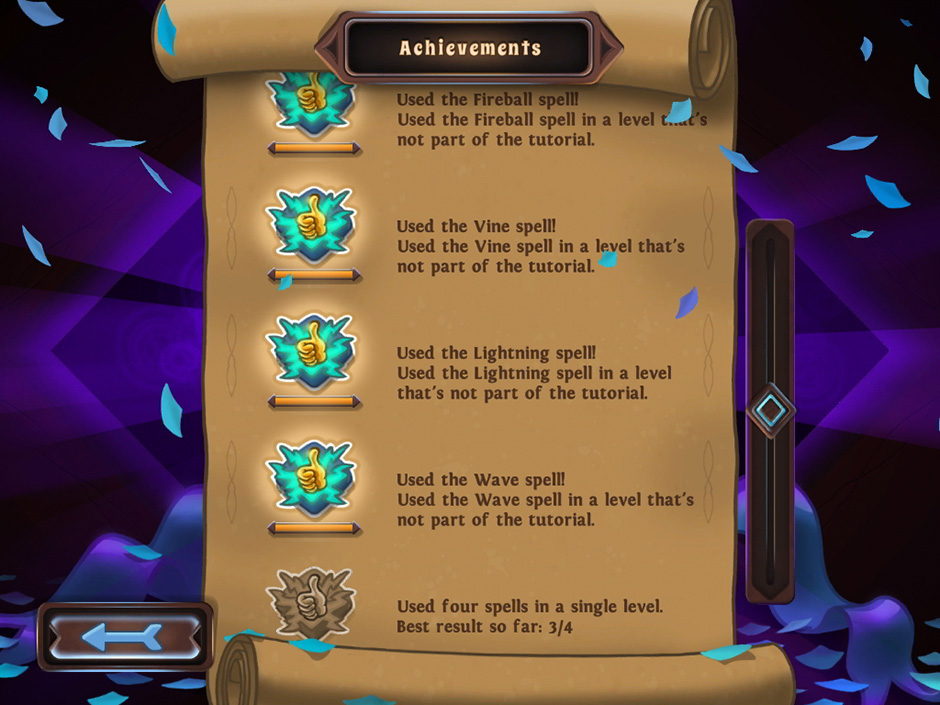 There are some tricks that make the game easier to complete, as well as making it easier to achieve that perfect score.

The Usual Bubble Shooter/Match 3 Tips
* Keep in mind the next block that will be available, and try to clear a path for it.
* Blocks don’t have to land directly on top of a matching block- they can land next to a block as well. Aiming between separated sets of matching blocks is especially effective.
* Blocks “fall” up, and a new match will also break, so try to create combos when breaking blocks.

* Eliminate specific block types whenever possible. This reduce the chances of getting a useless block.
* When trying to finish a level for the first time, focus on the blocks closest to the bottom of the screen when possible to avoid a loss.

Game of Stones Specific Tips
* There is no timer. The addition of a new row and the star rating depend entirely on the number of blocks fired. Take your time and think about your moves.
* Because you can switch freely between the two block shown, it is sometimes best to fire blocks out of order. Sometimes the “next” block will set up the block currently available.
*When working around ice blocks, it’s best to eliminate blocks in the columns next to them, then place a matching block next to the block above the ice block. 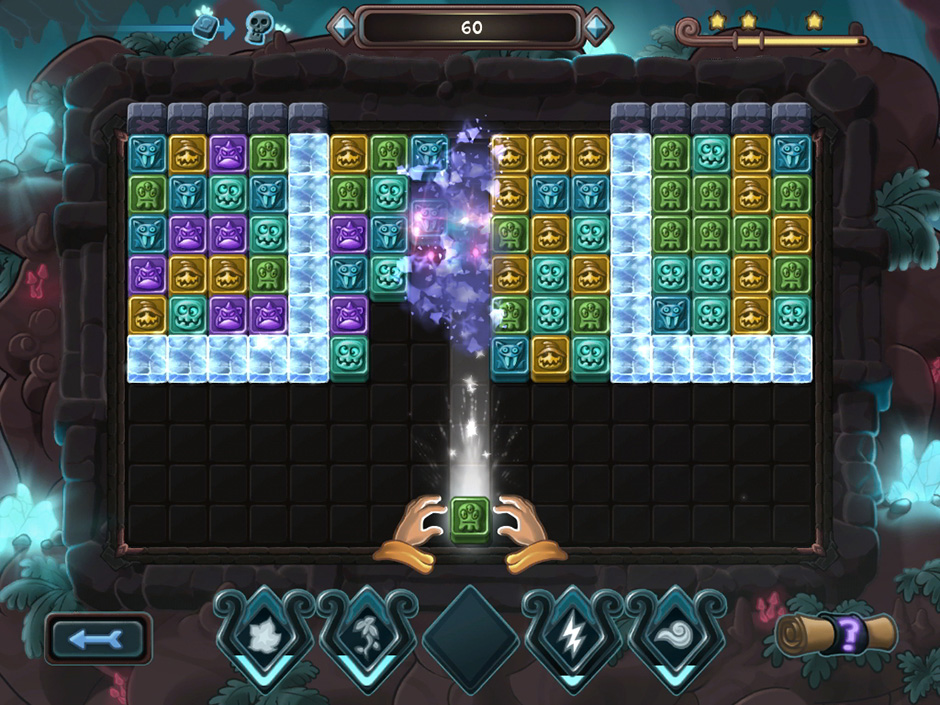 * The score multiplier is x6 for a three star rating and x3 for a two star rating. You’ll get more points and more gold finishing a level quickly than you would extending the game. The scroll at the bottom right will list the maximum number of moves for each rating, and the wand at the top right functions as a rating bar for tracking the rating in-game.
* It is not necessary to complete the entire game at once, as the game saves your progress every time you complete a level.

Spell Use
Spells recharge over time, so don’t be afraid to use them. Because of the no-break counter, it’s best to use them when you have a pair of blocks that won’t create a match.
Aim for blocks sitting by themselves with the Vine or groups of jumbled block types with the Fireball. Those groups tend to reduce the counter quickly by requiring multiple no-break shots to clear, but spells eliminate these blocks and don’t reduce the counter.

Notable Early Levels
Level 5 introduces the counter and adding new rows. It intentionally adds new rows quickly, but the blue skeletons can be eliminated quickly. Once they’re eliminated the pumpkins are very easy to clear.

Level 14 is the only one in the first 25 to have chalices. The goal is to break 20 chalices, not clear the screen, and clearing a block type won’t eliminate that type on this level. Focus on breaking the blocks below the chalices as quickly as possible and eliminating the tallest columns. This will usually eliminate the ice blocks.

Level 16 fills almost an entire row in the center of the board with ice blocks. Break through the opening in the middle of that row as soon as possible.

Levels 17 and 18 introduces column blocking stones. There’s a layer of ice blocks between the bottom of the board and the breakable blocks on each level, and the spells aren’t charged yet. Be sure to place the first blocks in the columns with the blocking stones, and in places where they’ll be touching matching blocks once the new rows are added so they’ll be easier to break.

Special Achievements
While most of the achievements will be completed through normal gameplay, some will require special effort.

Earn three stars on eighty levels- that’s a three star rating on every level in the game. This will require patience, repetitive completion of levels, and use of every trick listed here and learned by playing through the game. In the same vein is “earn two hundred stars,” which would require earning forty 3 star ratings and forty 2 star ratings, and “earn fifty 2 star ratings.”

Collected five chalices with a single shot- combos are key. Firing a shot that properly re-positions a series of blocks should complete this achievement.

Earn a total of 25,000 gold- playing one level very well generally earns about 200 gold, but to earn 25,000 gold you need to earn 300+ gold per level. It will take more than just one playthrough to earn this achievement, but should occur naturally when chasing other completion achievements. 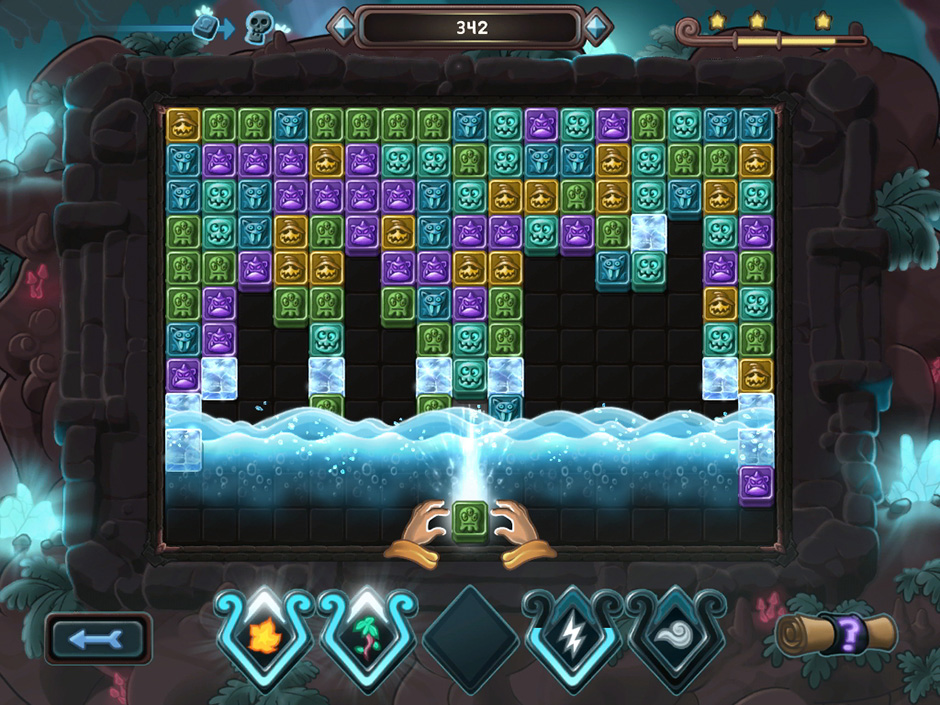 Destroyed a total of 300 stones with magic- this one should be completed through normal play, but it depends on your playstyle.

With this guide, you are well on your way to solving the puzzles contained in Game of Stones without using cheats. Be sure to check out more of our walkthroughs here at GameHouse!

The Game of Stones Walkthrough is meant as a guide and does not contain cheats, hacks or serials.