Clutter IV – Minigame Madness Tour is a celebration of the mini game genre. Enjoy hours of mind bending entertainment with 525 levels of matching, memory, card, slider and other picture puzzles. Clutter IV-Minigame Madness Tour take puzzles from its previous games and twists and warps them to create the most extreme collection of picture puzzles yet. This guide offers you strategies to guide you along the path of brilliantly challenging puzzles paired with inspiring quotes.

Clutter IV-Minigame Madness Tour is a charming yet challenging puzzle game containing 25 main quest puzzles and 500 minigames. When you think you are done, be sure to check the Extras box.

This installment in the series is like a ‘best of’ from previous titles, but on steroids. While there is no story line, the friendly conversation offering hints and the series of inspirational quotes is more than enough to compel you forward through the quest and receive greater achievements.

While the games in Clutter IV-Minigame Madness Tour are improved and developed to even greater difficulty, do not fear. You can adjust the difficulty in the Options menu with a simple click of the mouse. The Options menu offers tons of variations to tailor your game play to suite your tastes. 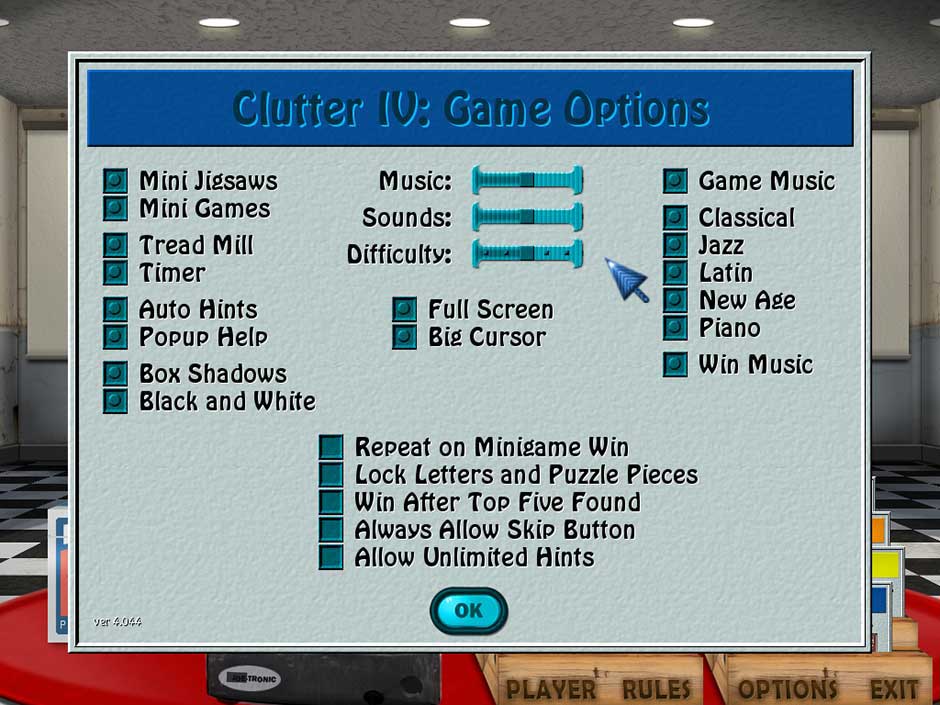 The premise of a Matching game is to find pairs of identical items in a pile of, well, clutter. These piles may include toys, food, butterflies, billiards balls, playing cards, figurines, plates and other dishes, luggage, hats, and more. You have a limited amount of time to find all the matches.

During The Quest, when you collecting puzzle pieces unlocks a mini game. Mini games are a good way to earn extra hints. If you just want all Matching, all the time, you can turn off mini games in the Options menu.

This guide will help you get the most enjoyment from Clutter IV-Minigame Madness Tour. It does not contain spoilers or cheats, but instead gives hints and tips to help you figure out the puzzles on your own.

The opening scene is a projector room with three screens. In front of you is a table with a projector and several sets of cards. To begin, click on the “The Quest” card. 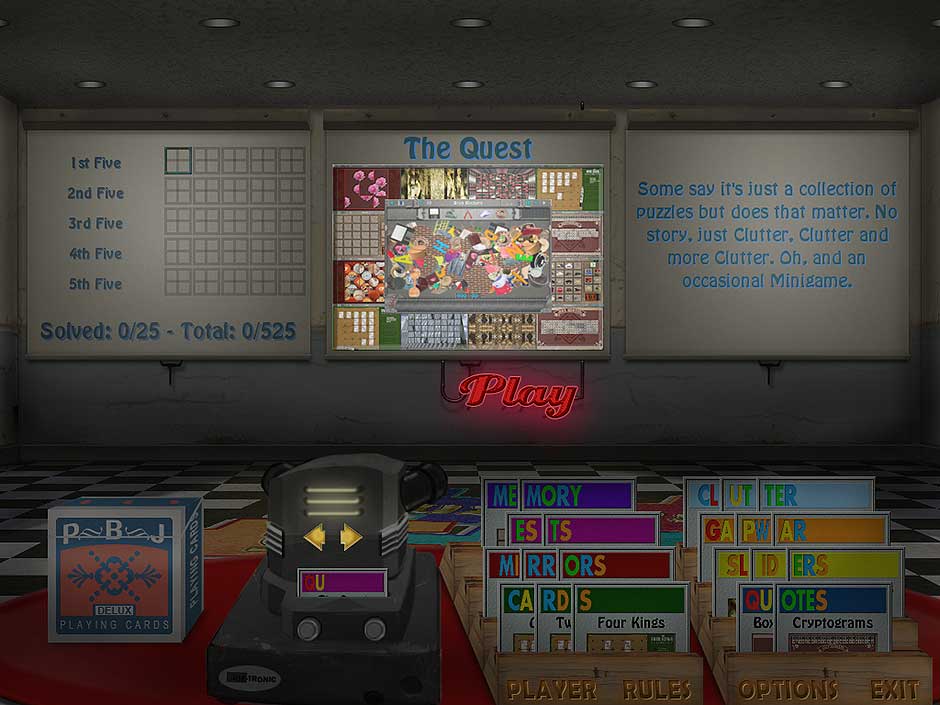 When you click on a card, the game drops the card in the projector. The far left screen displays the progress of that particular card, the middle screen is a pictorial representation of what you will encounter during gameplay, and the far right screen has a message from Joe.

The main quest of Clutter IV-Minigame Madness Tour consists of five groups of five puzzles. Click on matched objects to clear them from the board. Letters, coins, and square puzzle pieces can all be removed with a single click and do not need to be matched.

The first puzzle is the original style of this type of game. You start with 10 hints. You will have opportunities to earn more hints later in the game.

Brick Blockers cannot be removed by matching. To remove, make matches of the five objects shown at the top of the screen. Although you can remove an object that is blocked by a brick, these blockers can make it extremely difficult or impossible to identify all the items in the puzzle.

In this style of game, a shadow image of an object appears near the bottom of the screen. To clear items from the board, make a single click on an item that matches a shadow. In the first few levels of shadow boxing, you can see a fair amount of detail in the shadow image. As you progress, you are provided less and less detail until you see only a silhouette of the object.
Black and White

For the Split Decision games, all of the items are cut in half. You must match the two parts of the items. Fortunately, the Letters, Coins and Puzzle Pieces are still in one piece.

Three on a Match

As the name implies, this type of game requires matching three of the same object. To begin, you simply find and click on all three objects.

As you move into higher levels, you will have to click on two of the three and leave the third item on the board. Be strategic so you are not left with large areas of your board blocked.

This game grows as you play. For the first half of each game, after every match you make a new pair of objects is added to the board. Just when you think the game will go on forever, you meet the halfway mark and make progress towards actually clearing the board.

When you collect enough puzzle pieces during The Quest, your first mini game automatically unlocks. The colored boxes on the board are where you place tiles. Some tiles are placed individually, but most are placed in groups. You can usually match pieces with the same colored sides in a group, then place the group in the corresponding colored space on the board. 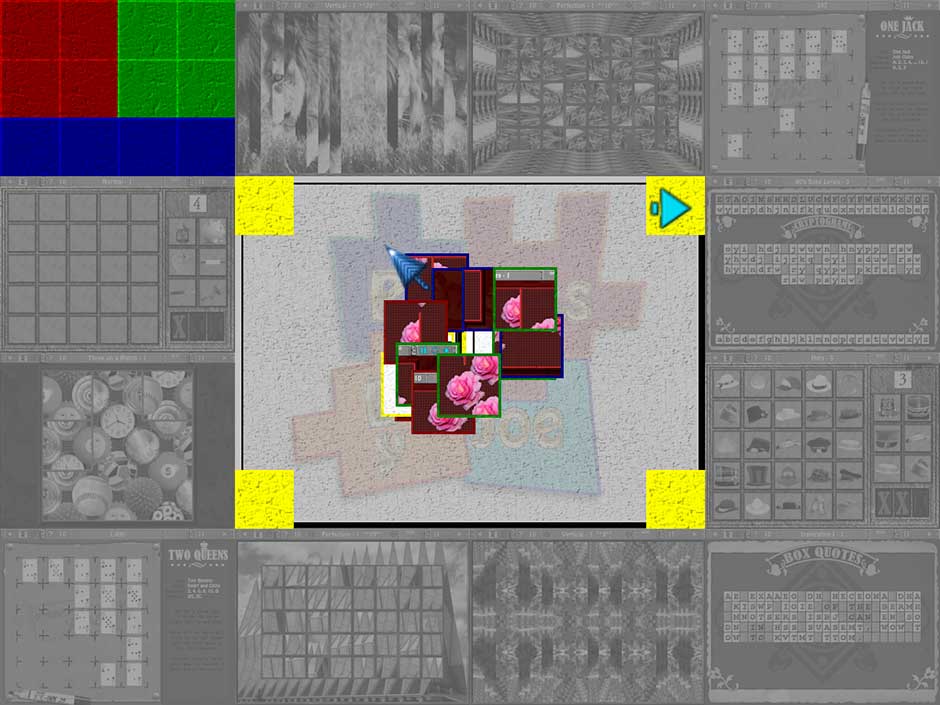 From the Projector Room, you can access the 500 mini games included in Clutter IV-Minigame Madness Tour. Following are the various forms of mini games.

In Wallpaper mini games, you swap pieces to match flowers. You cannot have a half flower on any edge. Variations of the Wallpaper mini game include Filler Up, which features a variety of items of which you must match the inside borders, and Slider Style where instead of swapping tiles you slide them either horizontally or vertically

In Variation One of the Memory game, you will find a grid of 25 blank tiles. On the right is a grid with space for six tiles. You are shown a single row of items for a brief moment. When those five items disappear, the block of six tile appear with items. You must find three items in that block that had been in the row of five tiles. You must complete each row before progressing to the next. You are allowed three wrong answers before you lose the mini game. 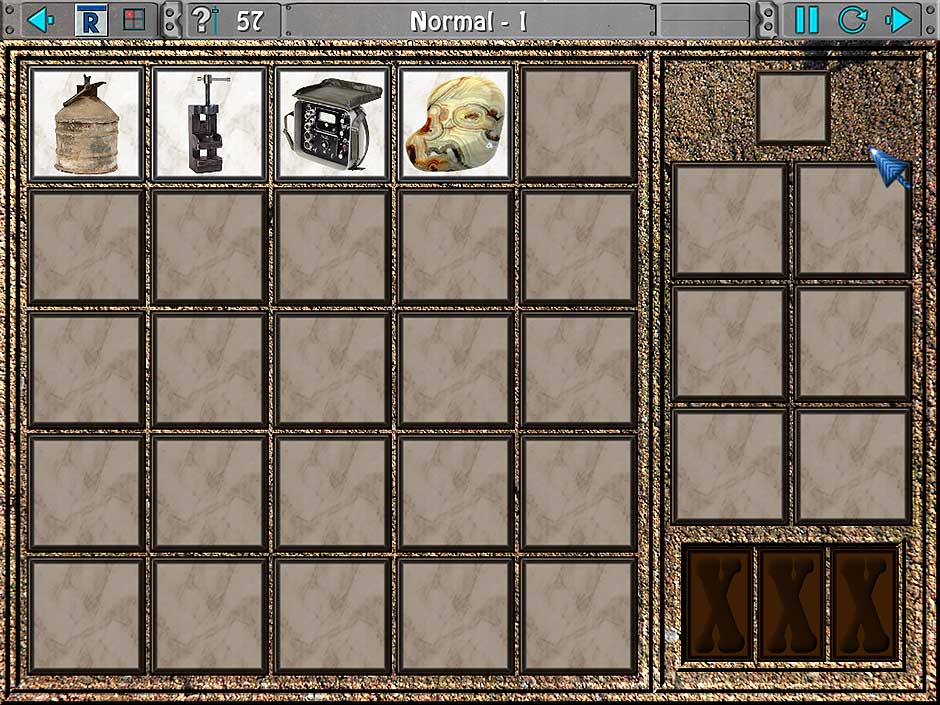 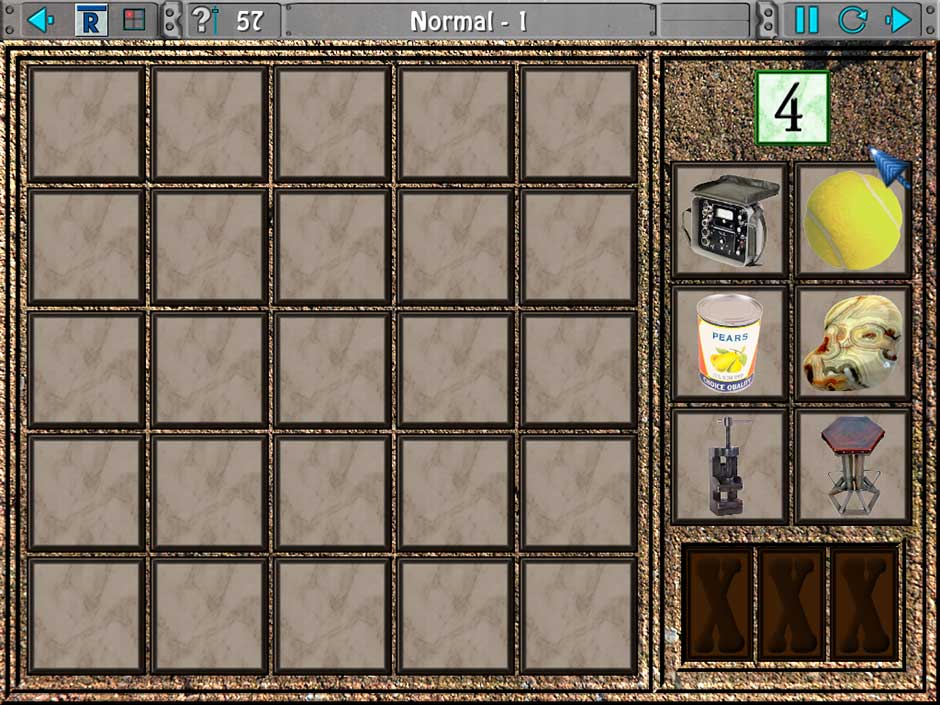 For Version Two of this mini game, you are shown all 25 items in the grid at once. The items remain visible while the block of six tiles appear. Pick three tiles in the block that are present in the larger grid. Choose carefully, because three strikes and you are out. 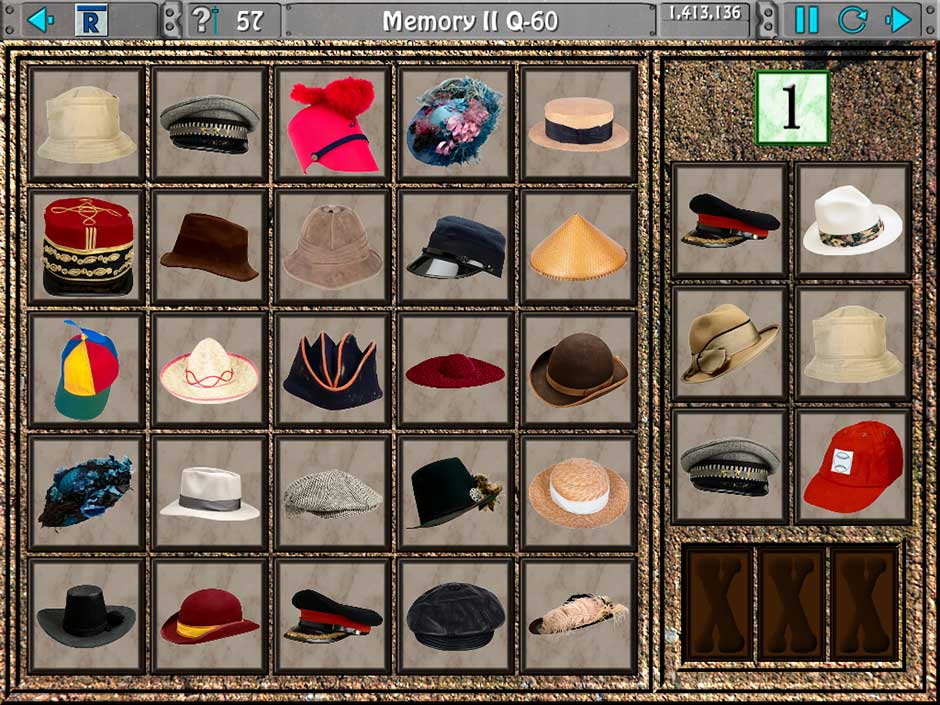 You will find 50 different pictures used for Sliders puzzles, and an additional 50 in the Extras box. In these mini games, you slide vertical strips of the picture side to side until the picture forms. Advanced forms use mirror and kaleidoscope effects. 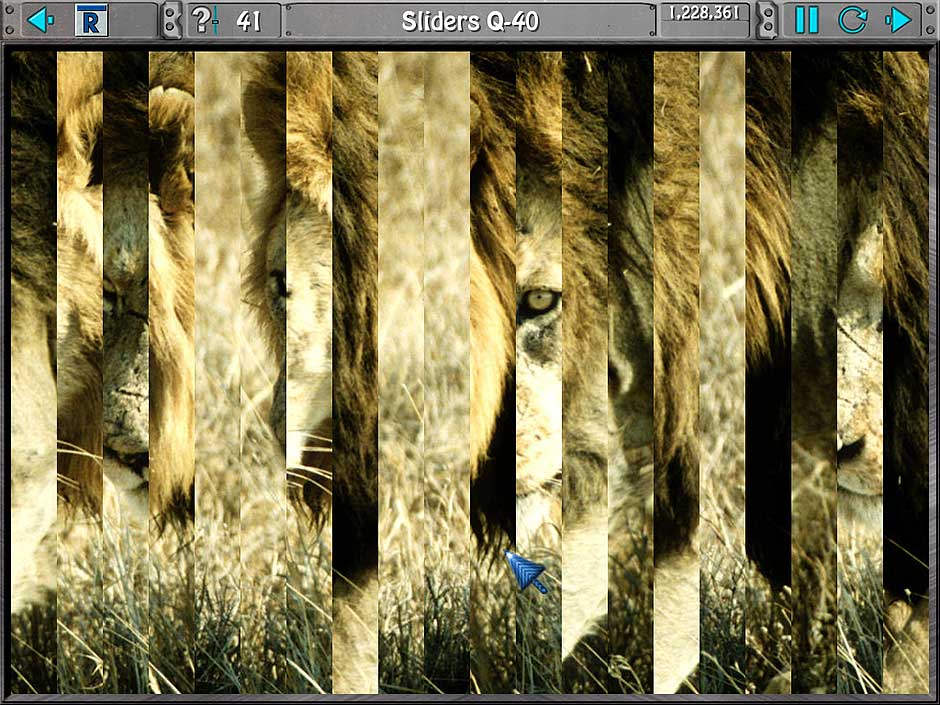 These are swap style puzzles with a twist. You can swap any piece with any other piece, but not all pieces are the same size. The image on the piece expands or contracts to fill the spot you place it in. Having a distorted view of life may be an asset in this style of game. As with most of these mini games, you will find mirror and kaleidoscope effects pictures. 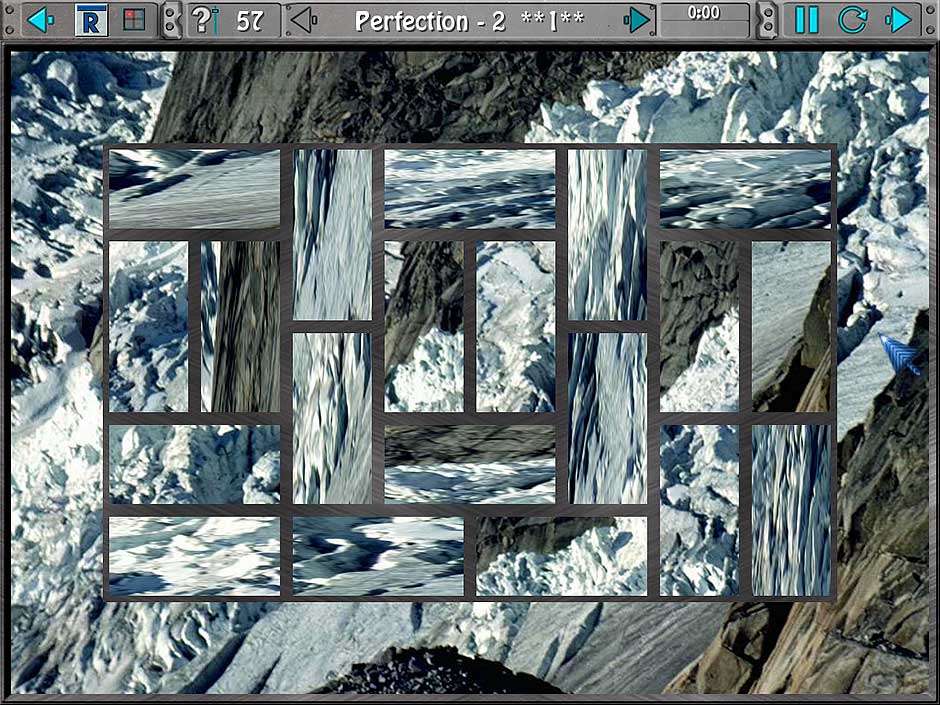 Your main clue in this style puzzle is the border color of the pieces. The border color will match the color of the square on the puzzle board. Of course, the old fashioned way of using the picture to guide you works here too. The pieces are compressed while on the side of the board but will expand to their full size when you drag them onto the board. 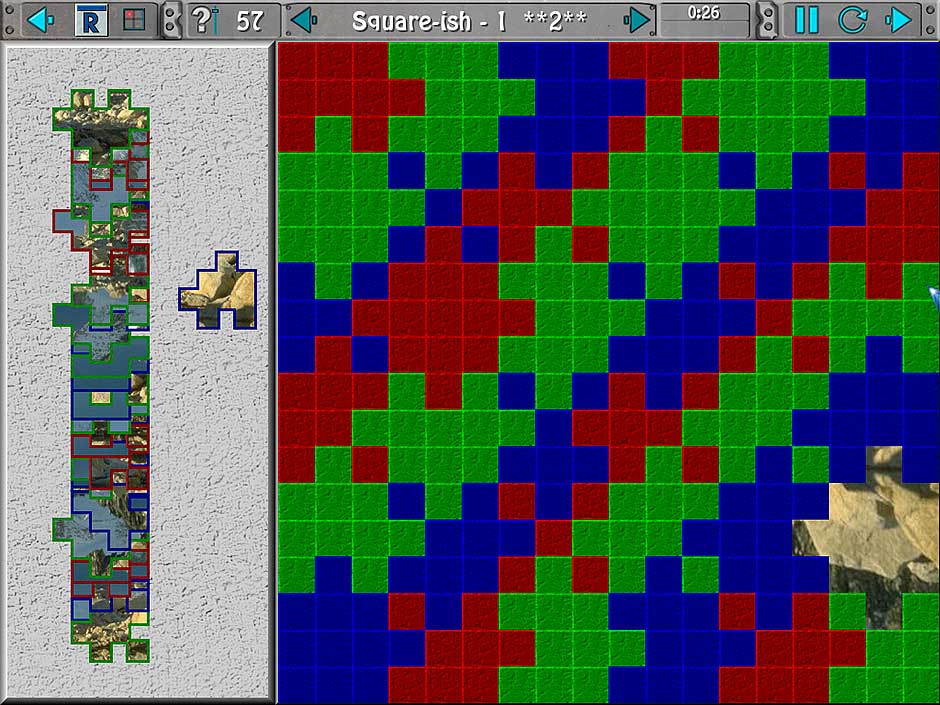 One jack, and the advanced forms of Two Queens and Four Kings, are very unusual styles of games. In this game, playing cards appear on the board. With each card, use the direction arrows on the keyboard to slide the cards to the top, bottom, or either side.

In One Jack, you only have a single suit. Every time you slide two cards of the same number into each other, they combine and turn into the next higher number. Continue sliding and combining until a single Jack is left on the board 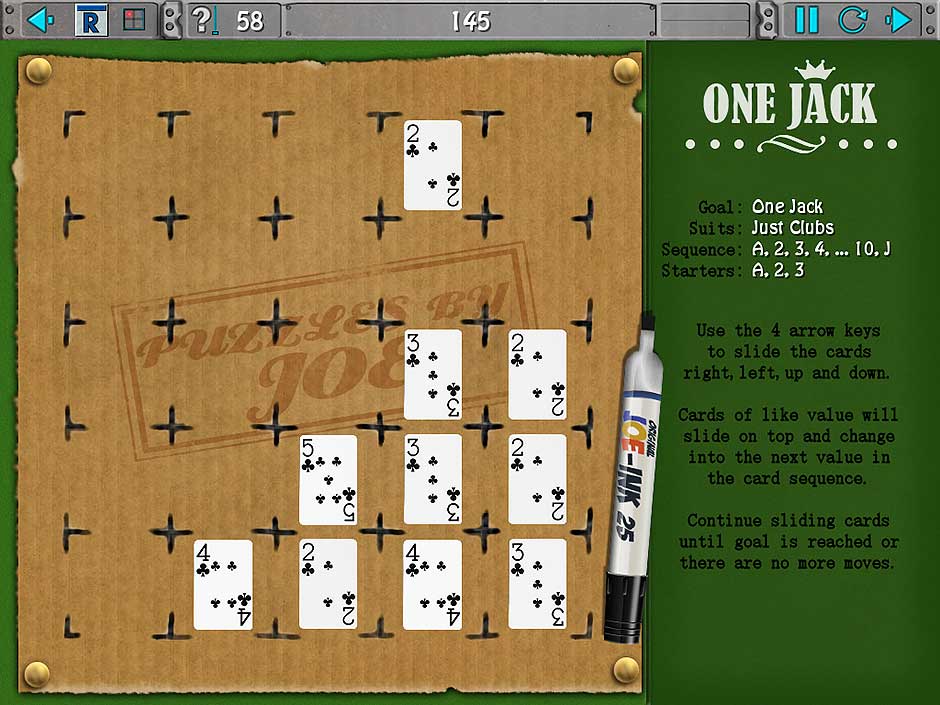 In Two Queens, you have two suits. Every combination will increase the card number by two. For a supreme challenge, Four Kings gives you four suites. Each card smash increases the card’s number by one, and when two 10s of opposite suites collide they cancel each other out.

In both versions of Quotes Box you work to decipher a quote. In Version One, you swap letters within a vertical column. When you get a correct word, it will lock into place, which decreases the number you have to choose from. A general tip is to start with short words like “the” and “a” to lock in a few tiles. 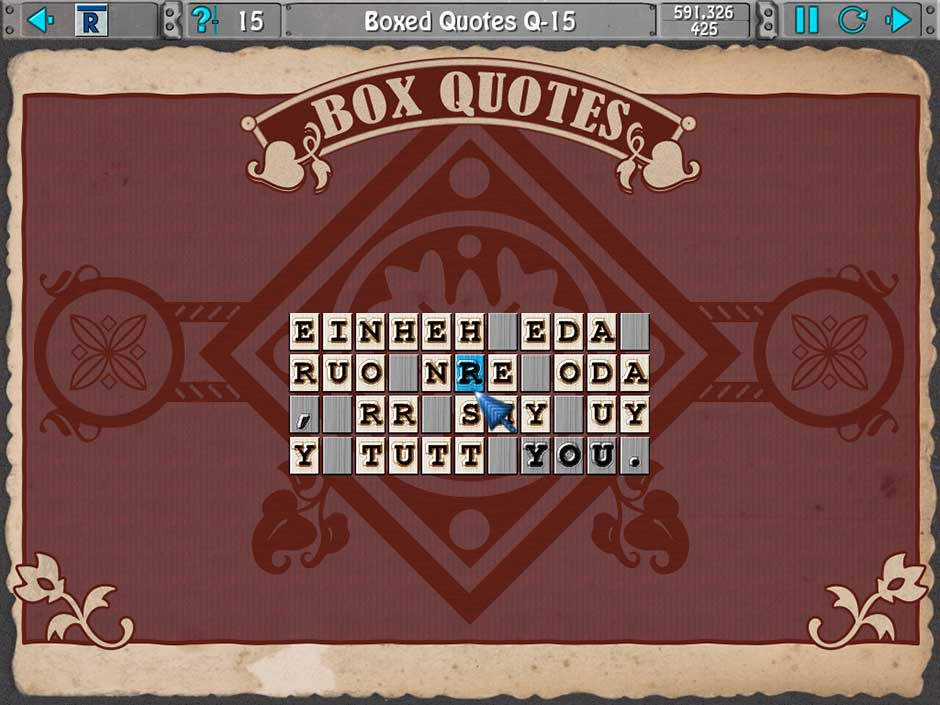 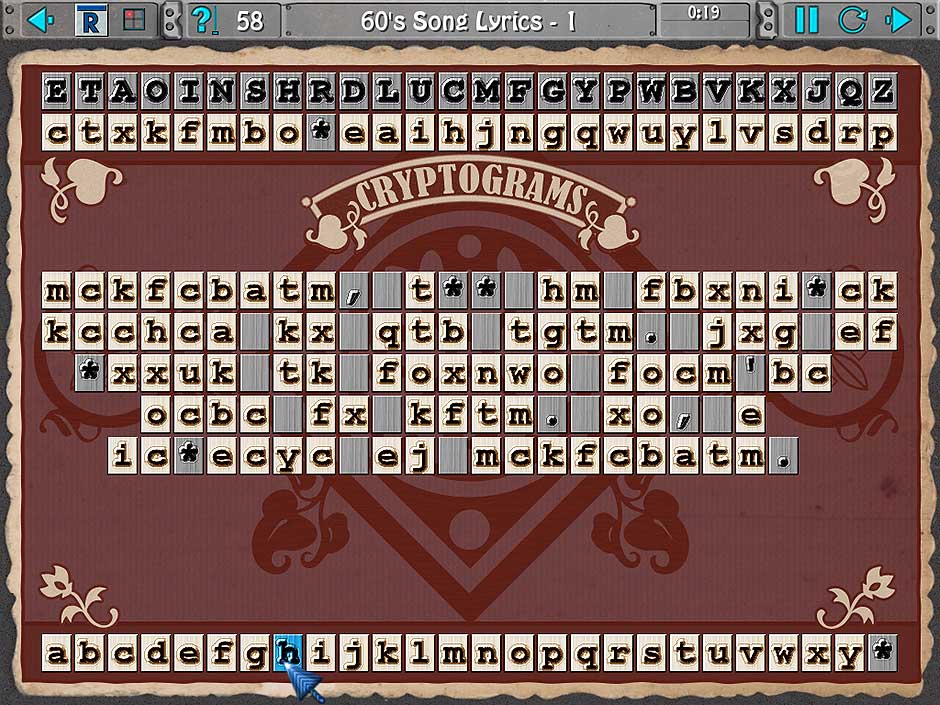 Congratulate yourself on your great achievements in the Clutter IV – Minigame Madness game! If you complete all 525 puzzles without your brain exploding you are indeed an elite puzzler.

Clutter IV-Minigame Madness Tour Walkthrough is meant as a guide and does not contain cheats, hacks or serials.