Around the World in 80 Days Walkthrough

Phileas Fogg was a man with a dream: to see the World. He was confident that he could, with the power of aerial balloon flight, but was met only with derision when he shared his dream with others. Determined to prove himself, Fogg made a wager: if he could travel Around the entire World in only 80 Days, he would win the post of Mr. Stuart, the Chairman.

So begins Around the World in80 Days, a match-3 puzzler that has you join Fogg in his quest to circumnavigate the globe by air. Visit exotic locales and collect trinkets from your destinations, all the while matching colored gems in groups of three or more. This Around the World in 80 Days Gameplay Walkthrough will contain information on the story and characters of the game, a guide to the rules, a level Walkthrough, and some tips and tricks to help you get the most out of your trip around the World!

Around the World in80 Days is a match-3 puzzle game. This means the object of the game is to match colored gems in groups of three or more to earn points. Matches can be made horizontally or vertically, and can only be made by swapping the positions of two touching gems. When gems are matched, points are earned, with more points being given for higher numbers of matched gems. Gems also disappear from the board when matched, causing more gems to fall from the top of the screen and take their place.

In some missions there will be additional goals, like obtaining certain objects. Matching gems below the objects will cause them to fall down the board, automatically adding them to your inventory. in addition, making matches quickly will increase the amount of points received with a multiplier, and making matches that result in subsequent extra matches from gems falling to take the place of previously matched gems will grant even more extra points. 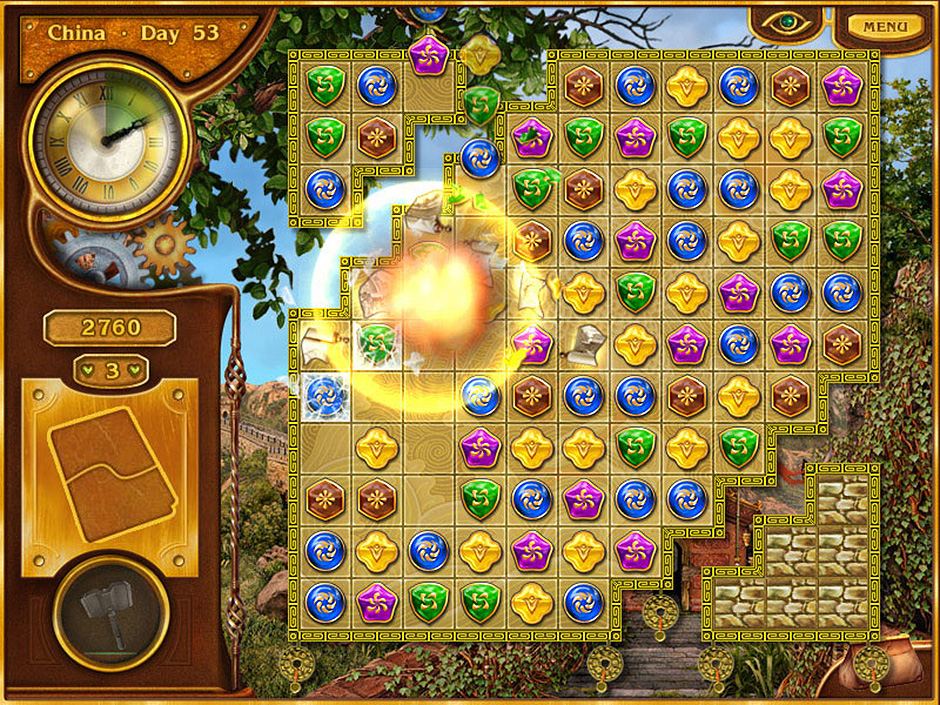 Around the World in 80 Days – China

-Phileas Fogg: A man of science, the young Fogg was often ridiculed for his obsessions, and in the thirty-odd years he’s spent tinkering and inventing, little has changed. Now, seeing an opportunity to obtain the coveted title of Chairman and redeem himself in the eyes of his peers, Fogg is prepared to embark on a journey no other soul has made.

-Jean Passepartout: A gentleman since birth, the squirmy Frenchman is most comfortable on the ground, preferably Ina nice overstuffed chair. Consequently, it comes as some surprise to him when his first task as Fogg’s new assistant is to gather supplies for a hot air balloon flight! Some suspect that there is more to Passe-partout than he lets on. It may not be coincidence that he ended up assisting Fogg: he may have delicate business in another country… 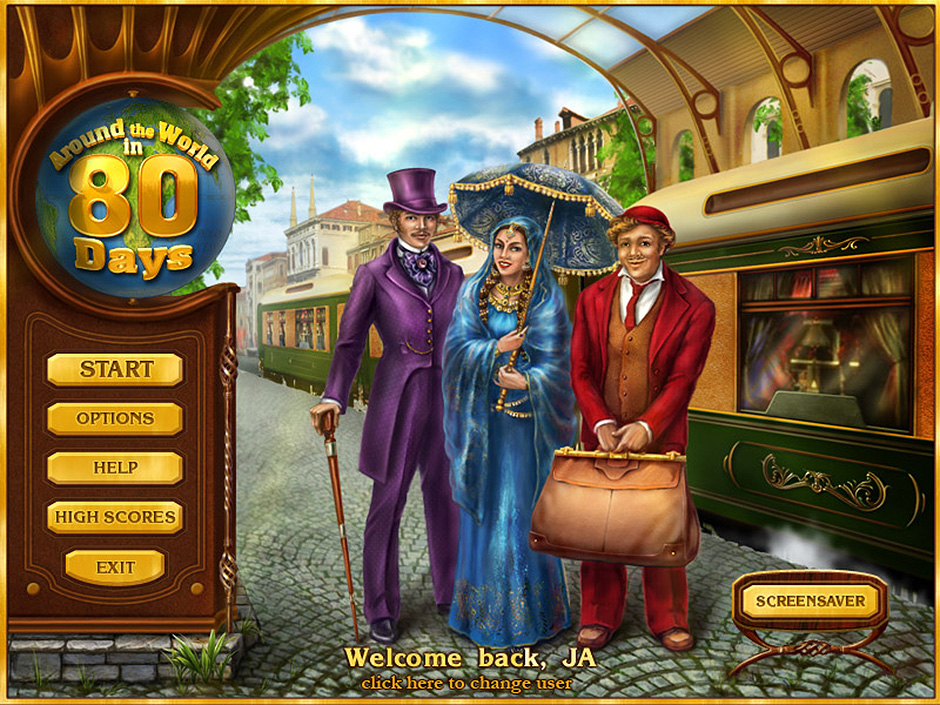 Around the World in 80 Days – Characters

-Mr Stuart: For as long as humans have had legs, they have needed chairs for which to rest them. And as long as there have been chairs, there has been a Chairman. Mr Stuart has been the Chairman for a very long time. He has seen much, and his eyes are weary from the job. Though he has absolutely no faith flogging’s absurd journey, a part of him desperately wants him to succeed, for the role of Chairman has become a burden, and Mr. Stuart’s soul is crying to be relieved of it.

-Jules Verne: A French novelist from the 19th century, Jules Verne is most well known for writing Around the World in80 Days, Journey to the Center of the Earth and 20,000 Leagues Under the Sea, but he’s written several more novels, a few of them sharing the theme of hot air balloon rides. Considered the father of science fiction, a recently uncovered lost novel of his called Paris in the Twentieth Century accurately predicted what the modern World would look like. He certainly was a character!

This is a Walkthrough of a typical level in Around the World in80 Days. in this level, the goal is to match gems until two items, the two parts of Fogg’s journal, are brought to the bottom of the screen and collected. At the start of the match, swap the yellow gem near the top-right of the board with the green gem directly to the right. This will cause a four-gem match. Next, swapping a blue gem near the bottom with the green gem above it will cause a three-gem match, making one of the two necessary items drop further down the board and closer to your inventory. More gems fall in place, but they end up matching quite a few times, causing a torrent of matching gems and a plethora of points. 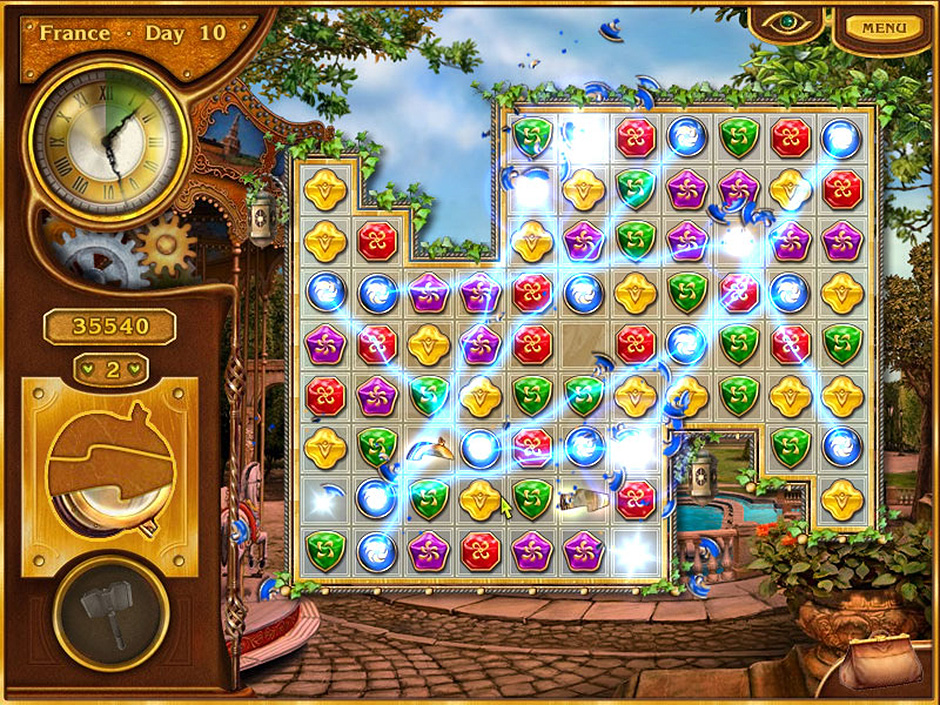 Around the World in 80 Days – France

To the right of the first item, towards the bottom-right of the board, is a green gem that when swapped with the yellow gem below it will cause a four-gem match, dropping the item into your inventory. One down, one to go! Swapping a green tile with a blue tile below it on the left side caused another four-gem match, and the second item drops a little further down. Then, swapping a blue and green gem pair a bit more to the left causes an innocuous three-gem match, followed by a massive T-shaped match of green gems, granting more points and dropping the second item closer to the bottom.

A pairing of yellow and green gems toward the center of the bottom of the board need only be switched vertically to cause a double three-gem match, as well as some extra bonus matches from the falling gems coming from the top of the board. Swapping a red gem with a blue gem near the right of the second item causes another series of three-gem matches, and opens up another potential four-gem match of yellow gems on the bottom. Finally, swapping the item with a red gem below it places it at the bottom of the map, adding it to your inventory and completing the level with a bonus three-gem match from the red gem. 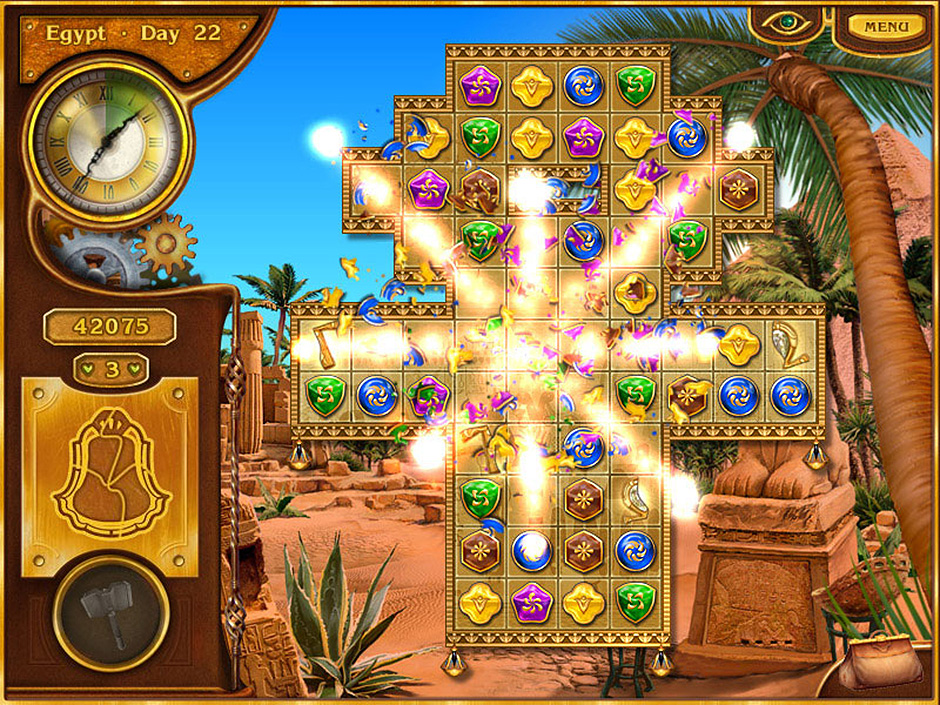 Around the World in 80 Days – Egypt

~ Try to get matches of greater than three whenever you can. The more gems you match in one swap, the more points you earn!

~ You should also plan out subsequent turns in advance so you can make multiple matches in quick succession. This increases your multiplier, giving you more points.

~ All rounds are timed. You can see how much time is remaining Ina level by checking the stopwatch in the top-left corner of the game screen. Completing the level with more time left on the clock will give you bonus points, so try and hurry through the level!

~ Though it may be difficult to set up, chaining multiple matches with one swap is a great way to earn a bunch of extra points. At the end of every level it will show you how many subsequent matches you were able to make off of one gem swap: keep it high, and try and get it higher!

~ When traveling by hot-air balloon, it is advised to pack light. While it helps to have some weighted objects to throw over incase extra altitude needs to be gained, that role can usually be delegated to sandbags. 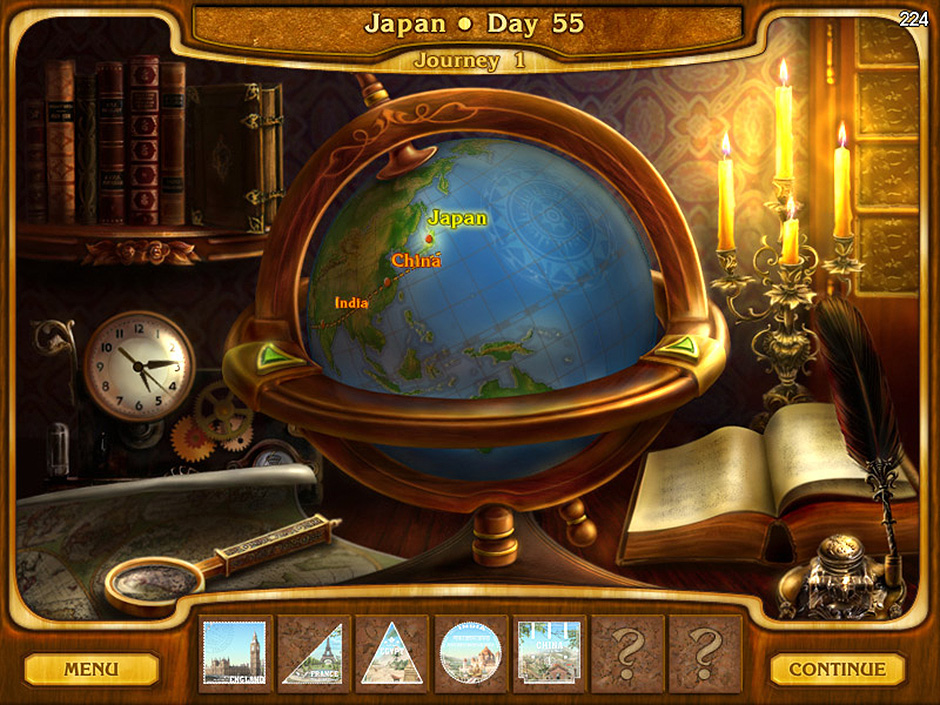 Around the World in 80 Days – Journey

Hot air balloons have fallen out of favor in recent years. The spectacle and scientific marvel has been overshadowed by the blimp and the zeppelin, and the convenience has been overshadowed by the common commercial airliner. This means hot air balloons have been deemed luxuries, or the pursuits of silly people with too much free time. However, some of the most impressive, the most awe-inspiring, and the most important discoveries were made by silly people with too much free time, and the hot air balloon enthusiast Phileas Fogg is no exception.

The journey he makes, the one you must aid him in if he wants to of complete it, is not done for honor or glory. It’s not done for status, for wealth or for power, even if completing this journey will bring about all those things. No, the reason Fogg pursues this epic task is for science: to push the limits of human ability, and to learn from the natural World by harnessing its power. Matching gems way up there in the cold stratosphere may be lonely, thankless work, but time will redeem you when your names are placed in the history books as the mavericks who dared to do the impossible. Now go! Fogg needs you.

Congratulations! You’ve completed our Around the World in 80 Days Gameplay Walkthrough! For more great tips and tricks, visit our blog!

The Around the World in 80 Days Gameplay Walkthrough is meant as a guide and does not contain any cheats, codes or serials.