Hera has angered the Cretan Bull, causing it to go on a rampage. The kingdom is in shambles. Amidst the ruined roads and buildings, a hero emerges: Hercules. As the titular hero, your task is to restore the great kingdom to its former glory, expand with new wonders and explore by solving perplexing puzzles. A daunting task, even for an Olympian, but this game play Walkthrough of 12 Labours of Hercules II: The Cretan Bull will assist with tricks, ensuring your success in all endeavors.

~ Any Prisoners should be freed as soon as possible. Prisoners turn into Workers, capable of clearing paths by collecting resources such as Food or Wood, and repairing Cracks and Broken Bridges. The sooner you have multiple workers, the faster you can complete the level, raising your final score.

~ When calling upon the aid of Hercules, Cerberus, Medusa, or other Heros encountered along your journey, save their actions for last. Make sure to gather whatever Gold, Food, or Wood can be found around the map before committing to Hero actions, because this often triggers a level endstate. Waiting until everything on the map is cleared results in a higher score.

12 Labors of Hercules II: The Cretan Bull is an action game with heavy emphasis on Time Management in its game play. Levels are a map, presented in an isometric view, with your cursor controlling your workers and Hercules. Workers can collect supplies such as Wood and Food, and can construct Farms to generate resources as well. Hercules is used most effectively for feats of strength, such as moving massive boulders or taming the savage Cerberus. The faster levels are completed, the higher your total score raises. Completion of levels with higher scores grant pieces of Marvels, which can eventually be constructed near endgame.

Your journey starts with a simple task: Clear the road. A mighty boulder has fallen, and you must get rid of it somehow in order to unblock the path. There is Food toward the bottom of the path: take it. This will give you the strength to clear the Blocked road in front of you, granting access to additional Supplies and Food. Your newfound bounty would best be used to construct a farm on the plot of land toward the bottom-right. This should allow you to gather the remaining Food needed to command Hercules to kick the Boulder blocking the road, completing your quest. But you must continue, to the next level. 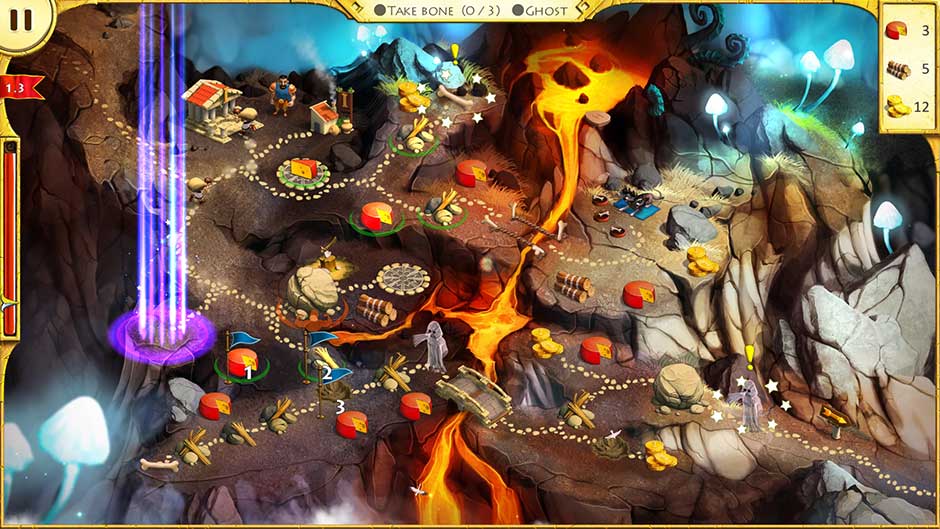 The Outpost is your next priority. There is another Boulder needing to be cleared, but that is the least of your worries. For now, clear the Food and Blocked Road on the path along the bottom of the map. Continue clearing the Blocked Roads in the middle to gain access to further Food stores. After collecting the Food and Wood stockpiles nearby, it is advised that you construct Farms on the plots of land near the left side. The additional Food generated by your efforts should allow you to finish clearing the path of Wood and Food, leaving room for Hercules to kick away the remaining three Boulders. Beyond is where events will transpire that test the soul… 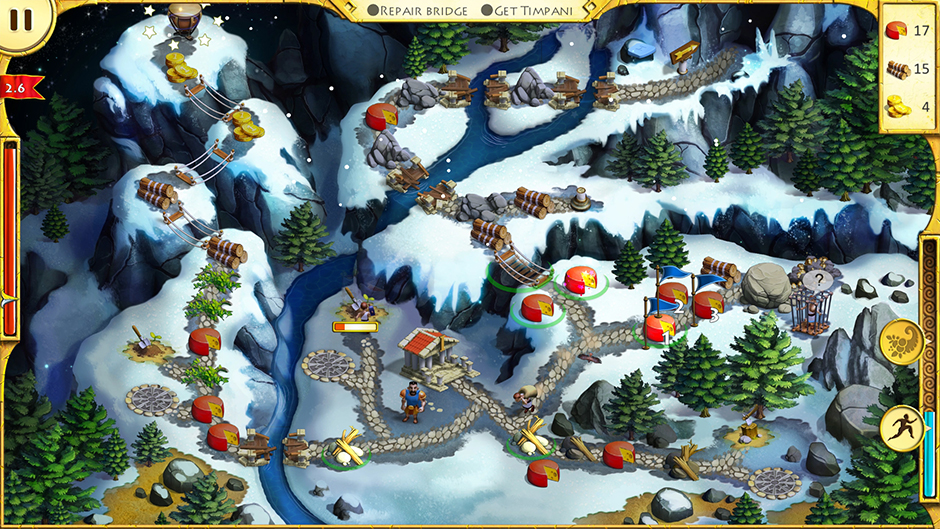 There is an infinitely spawning Food source at the bottom of the map. It would be good to take advantage of this bounty by checking it periodically.

Here, the objective is to collect a bone in order to chase away a ghost. Progress can be made by collecting the Food and Wood that obstruct the paths below your starting point, as well as to the right. The Bones you seek can be found near the top and along the left side of the map. Kicking the boulder near the middle will allow your Workers to construct a Workshop, which will surely come of use later. Once the three Bones are collected, and the supplies gathered, the Bone Bridge can be constructed over the lava on the path toward the top-middle, by the volcano. Hercules can then tame the mighty Cerberus, found on the path to the far right, who can be used finally to scare away the ghost on the bottom of the map. After kicking over a boulder, use Cerberus one more time to scare away the ghost and continue to the next challenge. 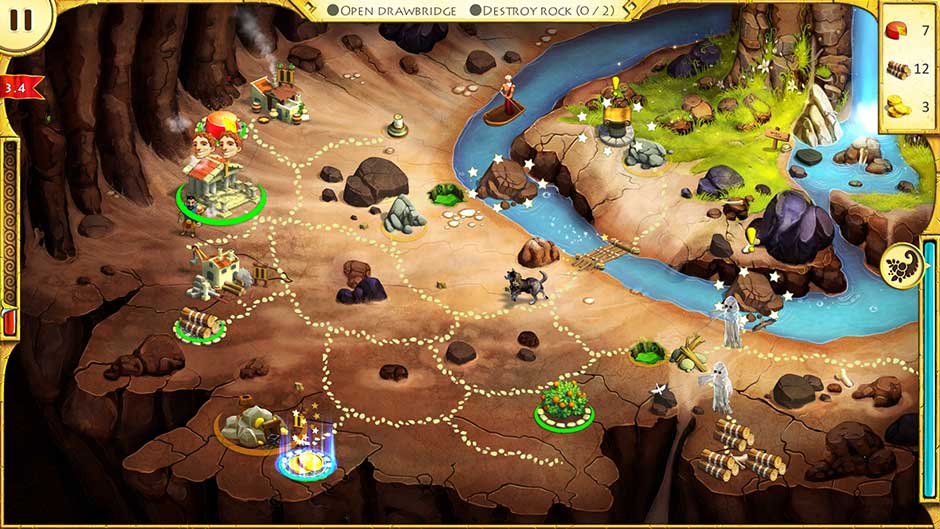 It is at this time Hercules deduces that Medusa may be of use, so he resolves to find her and seek her aid. To do this, you’ll have to pick up her trail with the aid of loyal Cerberus. Start by clearing away the Food and Wood in the path. Be sure to free the prisoner blocked by the pit by the start of the level; three heads are better than two, after all.

Building an Outpost on the plot toward the upper-middle and continuing to gather resources will allow you to gather enough materials to unleash Cerberus. Use Cerberus to track the trail left by Medusa after clearing the roads of supplies, and Hercules can be used to demolish a boulder located near the upper-right of the map, and another boulder slightly below that. This will complete the level, and not a moment too soon, for there is much to do. 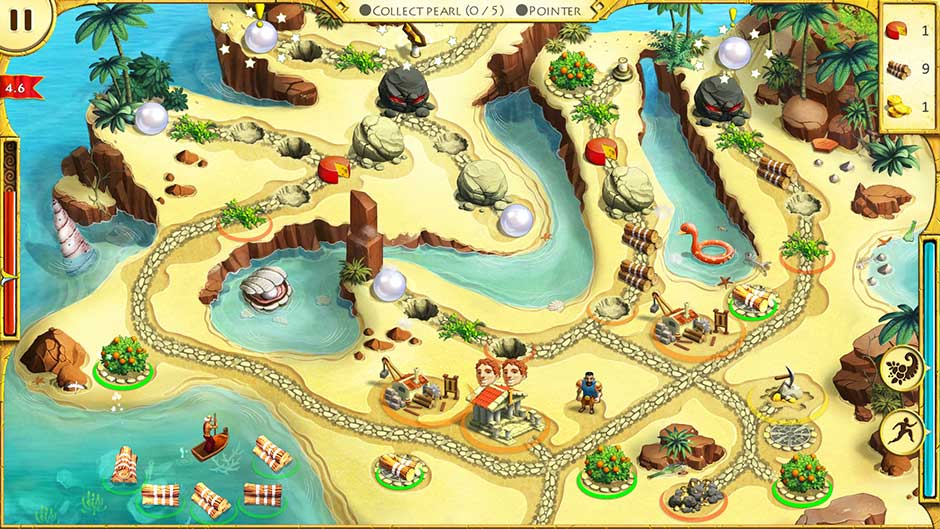 Careful, not so loud. There is no telling who can hear us, but heed this: there are thieves about! Some of the respawning food sources on this map are prone to pilfering by wandering thieves. Keep your eye out, and snatch that food before someone else can. Your final score will reflect your diligence. 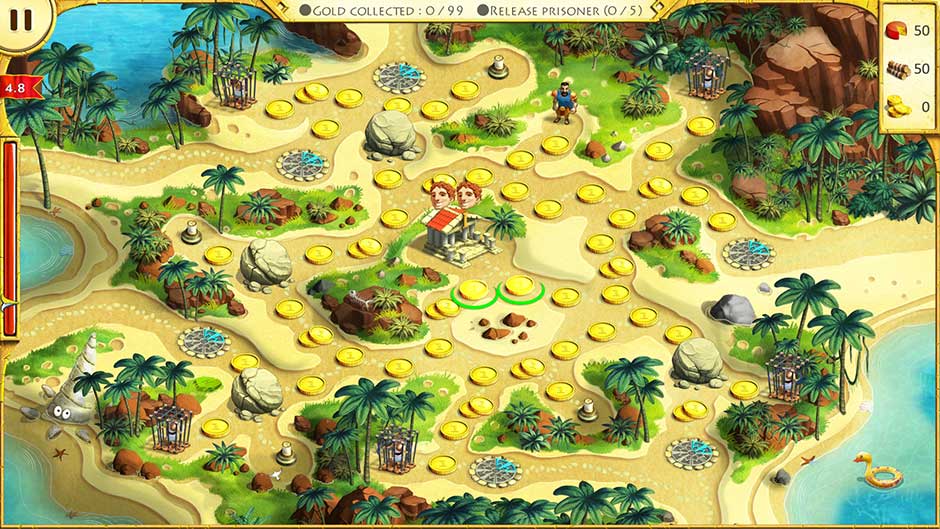 A simple task: Read the note. This task, though appearing easy enough, is obstructed with resources needing collection by your Workers. On top of all that, Hera is scaring Workers, so you’ll have to be on your guard. A pit, cleared near the bottom-left of the map, leads to a prisoner that can be rescued, and a plot of land that can be easily made to house an Outpost.

Further pits, cleared in locations near the far right and middle of the map, can be cleared to make room for more Outposts and pickups for Food, Wood and Gold. These resources will all be necessary in order to command Cerberus to clear Tracks, as well as accomplishing the more important task of helping Hercules to crush the Boulder standing in the way of the note that must be read in order to finish this level and move on to the next one.

Cheat #3
Hera has been known to fly around the map and harass Workers. Be careful, and click on Hera whenever she appears to prevent her from causing a nuisance for your Workers. Disregarding women has been known to follow in the acquisition of currency, so expect a boost in points if you stay on your guard, as well as an Achievement for stopping three attacks.

With Medusa’s location now discerned, Hercules has decided to visit her on the Island. To accomplish this task, the construction of a Boat is required, the logistics of which fall to you. Start by using your Workers to collect resources on the path, using the Horn of Plenty for an additional boost. There is a Prisoner needing rescue near the bottom of the map, on the island near the construction point for the Boat.

Two Bridges can be repaired as well, granting access to smaller islands rich with resources. Once enough resources are gathered to complete the three stage construction process for the Boat, Hercules can embark upon his journey to seek the aid of Medusa. Should you be following this game play walkthrough to this point you should also receive a plethora of achievements for your progress thus far.

The task at hand after reaching the island is to collect the Pearl resting at the top of the map. Workers can be put to use immediately by collecting resources such as Food and Wood to clear the paths. The speed at which the Workers move between objects of interest can be increased with a power up, once the bar on the right side of the screen fills up.

There are plots of land suitable for Farms along the shore of the island, once room has been made. A boulder, removed with the assistance of Hercules, protects a store of Gold near the top-left of the map, while the path above, impeded by a Crack and Broken Bridge, reveal a store of Food and Gold. Finally, Medusa can be called upon to frighten the two Minotaurs guarding the Pearl at the top of the map, leaving it open for the taking. Job well done.

The 12 Labours of Hercules II – The Cretan Bull Walkthrough is meant as a guide and does not contain cheats, hacks or serials.